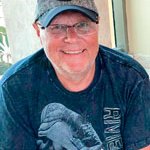 He was the son of the late James Bernard Griffith and Martha Taylor Griffith. Alvin is also predeceased by his son, Michael A. Griffith.

Al was a 1970 graduate of Franklin High School and the University of Richmond class of 1974, where he earned a bachelor degree in political science.

Al was employed by Smithfield Packing and worked as a supervisor for many years.

He had a passion for politics and could spend hours sharing his knowledge with his children.

Al was an avid football fan and closely followed the University of Richmond Spiders, Virginia Tech Hokies and the Philadelphia Eagles. He loved to be by the water on a boat, water skiing in his young years or just sitting by the ocean or a pool. Nags Head and anywhere in the Caribbean were his favorite places to travel.

Listening and dancing to music was also a favorite hobby. Just last year he was dancing with his grandchildren in Mexico. Al never met a dog he didn’t like and has left behind two special ones, Brady and Dakota. Al’s temperament was consistently even and slow to anger, always providing his quick witted humor for the family to enjoy.

Services will be private for the family due to COVID-19 restrictions.