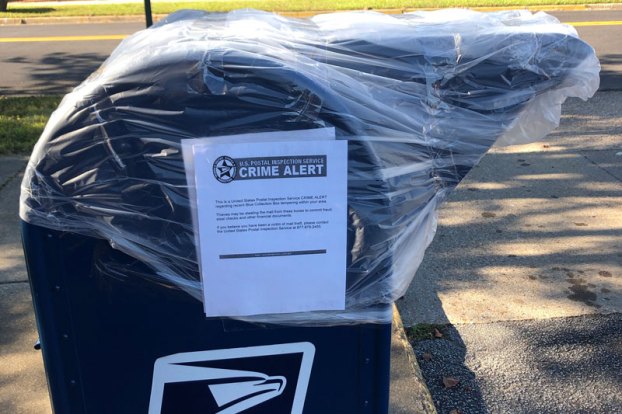 The blue mail receptacle located outside the downtown Franklin post office on Main Street is currently wrapped in plastic with a warning notice about mail theft from the U.S. Postal Inspection Service. Submitted

An outdoor mail receptacle located directly in front of the downtown Franklin post office on Main Street may have been tampered with, according to U.S. Postal Inspection Service investigators.

Michael Romano, a postal inspector and spokesman for the USPIS, couldn’t say when the alleged tampering had occurred, but a photo provided to The Tidewater News on Oct. 9 at 10:15 a.m., which shows the box wrapped in plastic and bearing a notice from the USPIS regarding mail theft, indicates the alleged incident occurred prior to that morning.

Romano is advising anyone with information regarding the crime, or those who believe themselves to be victims of mail theft from this location, to contact the USPIS at 877-876-2455.

There is no indication at this time of any mail-in ballots having been stolen, Romano said, and the city’s registrar, Jennifer Maynard, said her office hasn’t received any complaints from voters to-date regarding mail-in ballots dropped off at this location.

This is a developing story, which The Tidewater News will update as details are learned.

Decision on Lucas charges back with city prosecutor

PORTSMOUTH Portsmouth Commonwealth Attorney Stephanie Morales wasn’t a witness to the damage inflicted upon the city’s Confederate monument during a... read more