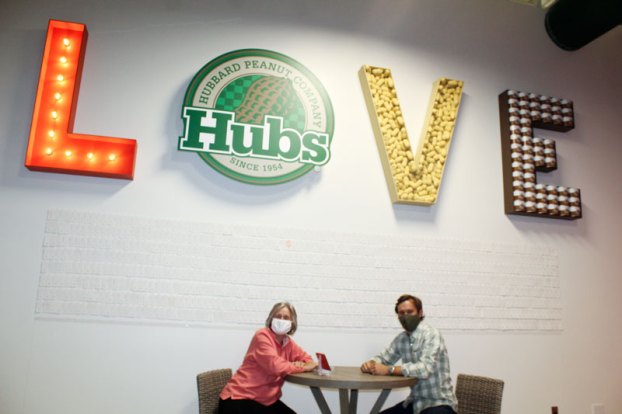 Lynne Rabil and her son, Marshall, are seated beneath the LOVE sign created by employees of the Hubbard Peanut Company — better known as Hubs. This can be found at the business' expanded operation, The Vine, located on Armory Drive in Franklin. -- Stephen H. Cowles The Tidewater News 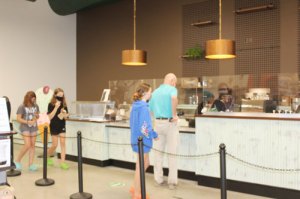 Franklin HIgh School Principal Travis Felts treats his daughters to ice cream at The Vine. The frozen concoction is one of the many food choices at the new retail market opened by the Hubbard Peanut Company. — Stephen H. Cowles The Tidewater News

The Vine reaches out to welcome customers

Eleven months ago, Hubbard Peanut Company announced it would expand gourmet peanut operations into Franklin, specifically at the site of a former grocery on Armory Drive. At the time, Hubs president Lynne Rabil said, “We envision an enhanced retail marketplace that will serve customers and visitors passing through Southampton County on Highway 58. We are encouraged by the proximity of the limited access interchange along this quickly growing thoroughfare and we will capitalize on the availability of the many amenities that already exist at this gateway to downtown Franklin.”

Renovations soon began and progressed even as the COVID-19 pandemic made its presence felt everywhere. In September, the new business was ready to launch a “soft opening” at the additional venue. There’s been no fanfare such as a traditional ribbon-cutting ceremony during a grand opening. Instead, people have been finding out — largely through word of mouth — that Hubs opened the new venue as The Vine. 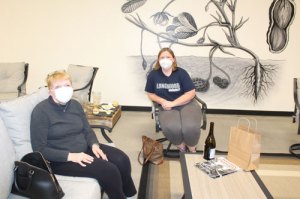 As mentioned, this space is not just a site for the Sedley-based business in which to store and ship its diverse product lines. Customers will immediately see inside this is also more than another place in which to buy the tasty legumes. There are also company/peanut-related gifts, wines (draft beers are expected much later) and even more food choices in the form of appetizers, sandwiches, salads, cheese boards, desserts and — yum! — ice cream that’s churned at the location.

Tables and benches spaced apart provide customers room to leisurely enjoy their food and the surroundings, which has been decorated to highlight the company and local agricultural history. On the walls are related murals created by regional artist John Hickey.

There’s a LOVE sign that company employees made for the site. Right underneath is a guest book, in which visitors can leave messages.

“We’ve tried to stay as local as possible,” said Rabil.

Marshall Rabil, her son and company vice president, pointed out that The Vine is to be “a family-oriented place.” For example, on the floor, games such as corn hole, shuffleboard and Battleship have been set up for anyone to play. Close by, the ice cream — did we already say that ice cream? — is provided by Lolly’s Creamery (which also has Three Ships Coffee) and Richlands Creamery, which features Hubs Peanut Butter Swirl.

“There’s lot of potential after COVID,” said Lynne, who hopes that an outdoor festival in the parking lot will be one example.

She emphasized that the company is not moving anything out of Sedley, where it all began decades ago in the kitchen of Dot Hubbard, who founded the Hubbard Peanut Company with her husband, H.J.

Beyond the walls set up for the retail space is a kitchen largely inherited from the previous occupants.

“We tried to use so much of what was already here,” said Marshall.

Naturally, there’s also the space for the aforementioned storage and spacing. Previously, Hubs was renting off-site space from Birdsong Peanuts.

“Birdsong has been really good partners,” Lynne said. “They were there when we needed them.”

She sees The Vine as becoming an unofficial welcome center to Franklin and Southampton County.

September FHS Employee of the Month

FRANKLIN The September FHS Employee of the Month is Patrick Lesley. Lesley has been an exceptional mentor for new teachers.... read more