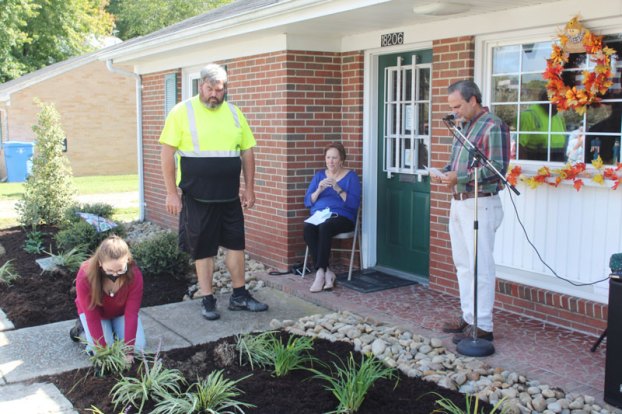 Olivia Hatch, one of the late Pat Draper's grandchildren, secures a plant in the garden created in Draper's memory. Witnessing are, from left to right, Justin Overby, Mayor Dr. Carolyn Modlin and Eric Coard. -- Stephen H. Cowles The Tidewater News 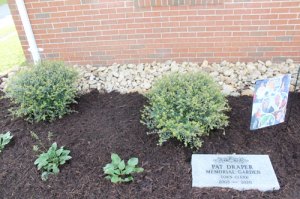 Pat Draper, the former town clerk, is remembered in beauty with the garden in front of the place where she worked for 15 years. — Stephen H. Cowles The Tidewater News

Family and friends remembered a loved one at noon on Saturday when the Pat Draper Memorial Garden was dedicated in front of the town office.

Eric Coard, who helped to organize the event, described her as “the face of Boykins.”

He acknowledged that the COVID-19 pandemic previously made such a gathering unfeasible months ago, but hoped “this service will fill the void in all of hearts.” 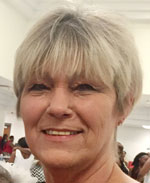 Pastor Raymond Bunn added in his invocation, “May what we do and say honors her … we miss her.”

Coard’s wife, Sandy, noted that Pat would occasionally complain about the landscaping — or the lack thereof — in front of the office. The idea developed after her death to create a garden and a committee was formed to include the Coards, Renee Lassiter, John Cann and Justin Overby

“I love and miss you every day,” said Sandy. “This is for you, my friend.”

Cann and Overby prepared the front of the office for a variety of plants, which features variegated English holly, liriope, hosta, yellow and orange daylilies and purple-colored flowers.

The Coards, Cann, Overby, Renee Lassiter, Olivia Hatch, Linda Beaty and the mayor then took turns in putting the plants into the soil.

Money that was raised for the project, and what was left over — $527 and change — was presented to Mayor Dr. Carolyn Modlin to be used as maintenance for the garden, who said that she was “in awe this much was raised.”