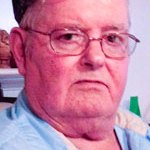 Nick was a son of the late Godwyn Theo Kitchen Sr. and Betty Blythe Kitchen Carr. He was also predeceased by his wife, Shara Drake Kitchen.

Nick was the co-owner of Kitchen’s Welding and Kitchen’s Cranes for 41 years. He was a charter member of the Southampton Coon Hunter’s Club and the Sedley Volunteer Fire Department.

Being an avid outdoorsman, he passed along his love for dogs, horses, the woods and camping to his children. Nick loved teaching them to ride horses and sharing his knowledge of the outdoors. He was extremely giving in teaching others the trade of welding and metal working. Nick would get a gleam in his eye when told by others that it was “a challenge.” There weren’t many “challenges” that he wouldn’t accept. His motto was “Do it right the first time.”

Nick was an avid coon hunter. He enjoyed competition coon hunting as well as hunting for pleasure. He raised, trained and hunted many great dogs. He also had many great friends he hunted with over the years.

A private service will be held.

The family suggests that memorial donations be made to any favorite charity.