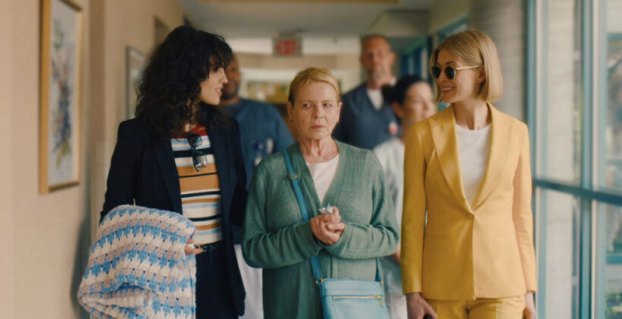 Review: ‘I Care a Lot’ doesn’t apologize for heartless lead

“I Care a Lot” is one of my first surprise hit movies of the year. Premiering at the Toronto International Film Festival, the film is incredibly entertaining, a mixture of jet-black comedy and intoxicating thriller. Even at times when the movie’s wackier twists and turns border on being over-the-top (or even sad), J Blakeson’s incredibly smart script ensured I never was taken out of the action or felt too guilty being entertained by the heartless lead character. I like that they trust that they have built enough clout with audiences that they can get away with being awful.

At the beginning of the film, it’s clear “I Care a Lot” is not going to apologize for its heartless lead character, as she already begins excusing the deplorable behavior that is to follow throughout the rest of the film. Starring the always-amazing Rosamund Pike as Marla Grayson, whose haircut is as icy as her character, her personal motto is to take before she gets took … to be the lion instead of the lamb. And I guess that’s how Marla can sleep at night, using her position as a court-appointed legal guardian to control every aspect of her clients’ lives and most ruthlessly, cheat them out of their money and possessions. Marla thinks if she doesn’t do it, someone else will … so why shouldn’t she benefit?

But Marla soon realizes she may be in over her head when she comes across an elusive “cherry,” or an older person with a lot of money and no family to check in on them or be the beneficiaries of their will. And it doesn’t matter that this cherry, Jennifer Peterson (Dianne Weist), still has her mental faculties. Marla has her doctor friend issue an emergency order with a judge, claiming Jennifer is mentally incapacitated and a legal guardian is required. Marla quickly moves in to put Jennifer in a nursing home and get to work collecting on her assets. But of course, nothing is ever that easy and Marla quickly realizes Jennifer may not be the person she thought … and this job is going to get a lot more dangerous.

Rosamund Pike hits it out of the park once again, playing a wickedly heartless character, similar to Amy Dunne in “Gone Girl” (right down to the haircut). I can already see the think pieces about whether Amy Dunne actually became Marla. I don’t know what I love more, Marla’s frosty demeanor, her amazing haircut or her to-die-for wardrobe. But bottom line, Pike hits it out of the park and her amazing performance anchors the film. I can see myself rewatching this movie over and over again based on her performance alone.

And despite Pike’s character’s steely relationship and lack of caring with everyone else around her, I really love that she was able to show her character’s warmer side through her relationship with girlfriend and business partner Fran (Eliza Gonzalez). I thought their chemistry was off the charts and appreciated that the movie didn’t make a big plot point over Marla’s character being a lesbian, but made it just as normal as if she were in a heterosexual relationship.

Bottom line, “I Care a Lot” is a really entertaining, quirky, and funny film that looked like it was as fun to make as it was to watch. I love a good anti-hero story, and this one certainly delivers. So keep this movie in the back of your mind to check out when it is inevitably released. You won’t be disappointed.

LAUREN BRADSHAW is a lover of all movies, even the bad ones. Follow her on twitter @ flickchickdc. She grew up in Courtland, graduated from Southampton Academy and doubled-majored in foreign affairs and history at the University of Virginia. She lives in the Washington, D.C., area.

By Charles Qualls “The people complain, and yet God provides.” If I were summing up this week’s lesson in Exodus... read more