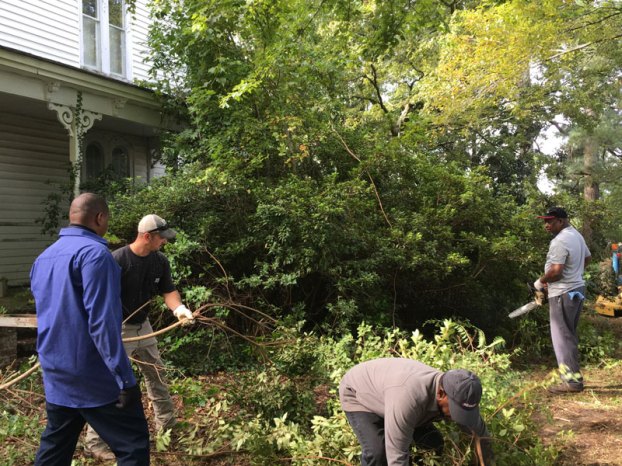 As these men are clearing on one side of the front, there's another cluster of volunteers who are hacking away on the other side of the shrubbery. Stephen H. Cowles | The Tidewater News

Volunteers clean up for Newsoms resident

The Southampton County Sheriff’s Office provides a free call-in service for residents 65 years and older who live alone. Such a program not only recently saved the life of one member, it also inspired volunteer work to clean her yard.

Between hacking and cutting down overgrowth last Saturday morning, Master Deputy Rob Busching said, “Senior citizens can call in every day to let us know they’re fine. If they don’t call by a certain time, we go check on them.”

When Margaret Wilson of Newsoms didn’t call in around 10 a.m. on Sept. 15, he drove to her home. Actually, the deputy first went past the place.

“I couldn’t see it at first. I thought it was abandoned it was so overgrown [with trees, shrubs, grass and vines],” said Busching. He returned, saw a trail of some kind, drove back and soon found Wilson on the ground, awake and alert. The 82-year-old had come outside the back porch on Monday around 6 p.m. and fell, but was unable to get up or call for help.

The deputy immediately got an emergency blanket to warm her and then called for an ambulance, which also drove past the site at first. Wilson was taken to the Southampton Memorial Hospital to be treated for exposure. She has since recovered.

Meanwhile, Busching informed Sheriff Josh A. Wyche Sr. about the condition of the grounds and suggested the department help Wilson in this matter.

After securing her permission,the sheriff’s got the help of some deputies, members of the Fraternal Order of Police and members of three churches in the town. Virginia State Police was also represented.

This past Saturday morning at 9 a.m., they began mowing the lawn, hacking at overgrown shrubbery, trees, etc. Much of the debris was put in the woods behind the house.

A couple of hours later, nature’s aggressive work had been successfully arrested.

The sheriff went by to see Wilson. She declined to speak to the newspaper, but Wyche reported that “she said she was ‘very excited’ when she saw the work that had been done.”

Fundraiser assists fire department BOYKINS Is it too soon to get your classic or antique car or pickup looking mint... read more