Born on Oct. 31, 1931, in Hastings, Michigan, he was the son of the late Lloyd and C. Marguerite Lancaster Shroyer. 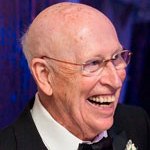 Norm was a graduate of Battle Creek High School in Michigan and served in the U.S. Air Force. He received an undergraduate degree from Purdue University and a master’s degree from the University of Cincinnati, schools he loved and supported throughout his life. Norm was the technical director for Union Camp Corporation from 1970 to 1993.

Norm spent his retirement years traveling the globe with his wife, Mary, and giving back to his community as a volunteer in Franklin. He was a member of the Rotary Club, and regularly attended weekly meetings. He served with the Franklin-Southampton United Way. Norm was a member of Franklin Presbyterian Church. He also spent time wood working, creating tables and cabinets for his family.

Norm is remembered by friends and family for his infectious smile, laugh and outgoing personality. His family remembers him as fiercely competitive in all family games, from cribbage, cards and all board games, including Aggravation, played on a board his father made. “Stormin’ Norman” had a love/hate relationship with golf, which often left him with drives shorter than he would throw his driver.

In lieu of flowers, the family suggests that memorial donations may be made in Norm’s name to The Village at Woods Edge in Franklin.