Abbey Ballance has been active at school, community, church 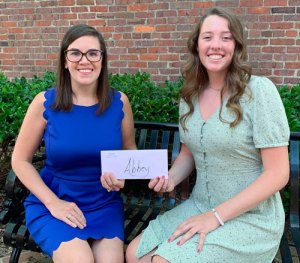 The Franklin-Southampton Area Chamber of Commerce is committed to supporting the educational attainment in our community. Presented since 1995, this annual scholarship award for a graduating high school senior honors Donna C. McCullough, who served as executive director of the Chamber from 1976-2004. The Chamber is proud to present the 2020 Donna C. McCullough Chamber Scholarship to Abbey Ballance.

Abbey graduated second in her class at Southampton High School. This scholarship provides recognition for involvement and service to the community, demonstrated leadership and academic achievement.

While attending Southampton High School, Abbey also participated in dual enrollment at Camp Community College receiving her associate degree of Arts, Science and General Studies in May. These honors were accomplished while balancing a 20-hour work week between two jobs.

Abbey has volunteered over 500 service hours with the YMCA Leaders Club serving as Vice President. At the YMCA she has also served as a lifeguard and soccer coach and volunteered at multiple family program events and youth basketball. Through this service she is a trusted role model for the younger kids.

As an active member of Rock Church of Franklin, she has been a worship leader for many years and is serving as an intern. Showcasing her talent for taking photos, Abbey has been the leading photographer at the annual Ben S. Dillon Memorial Golf Tournament since 2018.

At Southampton High School, she had been involved on the Student Government Association, Homecoming Committee, Christian Club, Yearbook Club, Prom Committee and RISE Against Hunger Annual Food Drive. Abbey has been inducted into the National Honor Society and National Beta Club.

Several people had this to say in their letters of recommendation:

• “Quite simply, Abbey leads by example — she is aware of her surroundings and aware of how her actions can impact those around her. She is an enthusiastic and passionate leader and volunteer, building up her peers and making a positive difference in her world.”

• “Abbey has a work ethic and a drive that is unparalleled in any student that I have ever seen grace the halls of Southampton High School that was instilled in her by her family.”

• “She is kindhearted, a born leader.”

• “In everything she participates in she gives her all. She is one of the most selfless caring, dedicated and focused young people I have ever had the privilege to work with.”

Abbey is the daughter of Paul and Tate Ballance, and will attend Christopher Newport University this fall.

TERESA BEALE, IOM, is the executive director of the Franklin-Southampton Area Chamber of Commerce. Contact her at either 562-4900 or teresa@fsachamber.com.

ISLE OF WIGHT The Confederate monument that has stood outside Isle of Wight’s government complex for 115 years won’t be... read more