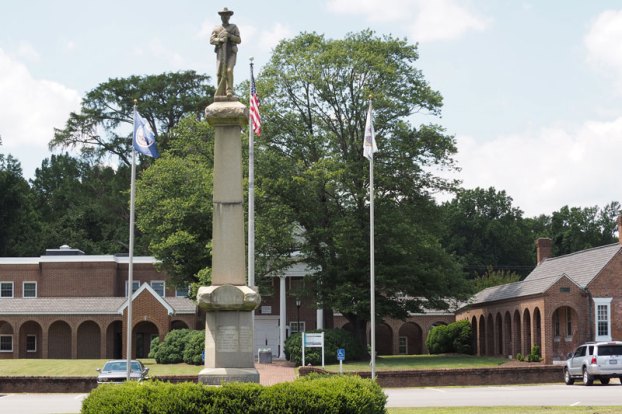 Isle of Wight County's Confederate monument won't be going anywhere until at least December, when a new task force presents its recommendations for alternate locations and signage contextualizing it should it stay at Monument Circle. File photo

The Confederate monument that has stood outside Isle of Wight’s government complex for 115 years won’t be going anywhere until at least December, despite a months-long push by some county residents to remove it.

Using the authority given to them under a new state law, a number of Hampton Roads localities have voted to take their Confederate monuments down since July. But Isle of Wight’s Board of Supervisors voted 4-1 on Thursday to defer making a final decision on its statue’s fate until after a board-appointed task force evaluates potential sites for its relocation and possible verbiage for a sign contextualizing it.

Newport District Supervisor William McCarty, who had made the motion to do so, described his idea as a group of 10 county residents: one from each of the county’s five voting districts, one from the Isle of Wight NAACP, one from the county’s historical society, one from a citizens’ group, one from the Chamber of Commerce and Assistant County Administrator Don Robertson. At the urging of Smithfield District Supervisor Dick Grice, McCarty specified a deadline of Dec. 1 for the task force to present its recommendations.

“I read in an ancient book somewhere … be quick to listen, slow to speak, slow to wrath or anger,” McCarty quipped, alluding to a Bible verse. “It is because of that I believe that a citizens’ task force, diverse, that I’ve outlined … I believe this is the right step so we can make the decision that is right for our county.”

The dissenting vote came from Hardy District Supervisor Rudolph Jefferson, the sole African American member of the Board.

“I think that now is the time for this board to decide what we’re going to do with the monument,” Jefferson said. “I don’t think that a Confederate monument should be in front of a county courthouse … If you look around the country, you see the protests … that sends a signal to us that this country is changing. We need to be part of that change. If you look at all the other localities around, what have they done?”

Jefferson then asked that if a task force was to be formed, that the monument be covered until such time as that body makes its recommendations, but McCarty disagreed.

“Knowing the nature of human beings, that may produce greater rumor and greater depths of issues,” McCarty said.

One week prior to the vote, the matter was put to a public hearing, which drew more than 40 in-person speakers and additional written comments and petitions. Changes to state law that took effect July 1 require such a hearing before any locality can legally remove, relocate, cover or add signage contextualizing its monuments.

The Board expects to appoint task force members at its October work session.

Erected in 1905 by the United Daughters of the Confederacy, the monument depicts a Confederate soldier standing atop a granite base engraved with the following words: “Isle of Wight’s loving tribute, to her heroes of 1861 to 1865. They bravely fought. They bravely fell. They wore the gray. They wore it well. Bright were the lives they gave for us. The land they struggled to save for us, will not forget its warriors yet, who sleep in so many graves for us. They bleed – we weep. We live – they sleep … Glorious is his fate, and envied is his lot, who for his country fights and for it dies. There is a true glory and a true honor: the glory of duty done, the honor of integrity of principle.”

The National Weather Service has issued a flash flood watch for the Western Tidewater region, which will remain in effect... read more