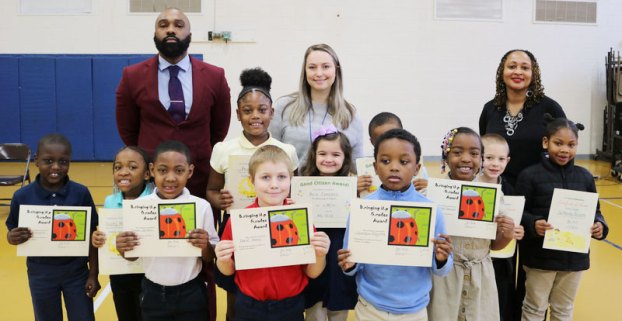 Posing with certificate winners at S.P. Morton Elementary School are Dexter Warren, at left, with Tanyekea Thornton, far right. Warren has gone on to become a principal at another school in VIrginia Beach. Thornton is now leading S.P. Morton. -- Submitted

Tanyeka Thornton has been named the new principal of S. P. Morton Elementary School and she’s ready for an exciting school year.

Thornton was appointed to the role following the departure of Principal Dexter Warren who had a hand in choosing the new principal.

“I just felt like she was ready. I always praise her. We’ve been working side by side and I can’t think of a better person,” he said.

Thornton has been with the division for going on three years. She began as an instructional specialist, then as an assistant principal for the elementary school, before being chosen as the new principal. For Thornton, FCPS feels like home.

“It has been a wonderful opportunity to work in this division. The teamwork throughout the district, not just S.P. Morton, is amazing. Everyone is willing to support one another at FCPS,” she said.

A lifelong educator, Thornton, who is a graduate of Southampton High School and Virginia State University, has always known she wanted to work with children. As early as third grade, Thornton was asking her teachers if she could take home the extra copies so she could go home and play school. While in high school, she participated in her school’s childcare program and excelled at taking care of the younger children that they would work with. She remembers her teacher telling her, “You’re going to work with children and you’re going to be phenomenal with it.”

As FCPS prepares to begin a very different school year, Thornton is optimistic. “With everything going on with COVID and the virtual instruction, I’m excited to see how we as a school district continue to make sure our children are successful and still getting what they need to get in light of everything that is going on,” she said.

Superintendent Dr. Tamara Sterling is excited to have a former S.P. Morton student as the new principal.

“We are excited to be a part of her transition as she begins to lead the school she once attended!”

CLEO SYMONE-SCOTT is the communications and social media coordinator at Franklin City Public Schools. Contact her at 569-8111, ext. 5502 or email cscott@fcpsva.org.

Even though Dexter Warren is leaving his role as principal at S.P. Morton Elementary School, his legacy at Franklin City Public Schools will certainly continue.

Warren, who began at FCPS as assistant principal at the elementary school, was only 28 when he began his role. At 31, he was promoted to principal, which makes him the youngest principal in FCPS history. He was also the first African-American male principal at S.P. Morton.

“I’ve made history and done a lot of great things here,” he said. While it hasn’t always been easy, Warren said he’s learned so much while being a member of the FCPS family.

“Each experience I’ve had here helped mold me to be the educator I am today,” he said.

While reminiscing on his time at FCPS, Warren said the friendship he formed with J P. King Middle School’s Principal Darren Parker is something he will cherish forever.

“He has really taken me under his wing, almost as a little brother, but also as a mentee. I don’t know where I would be without his guidance,” Warren said. “He’s taught me how to break down data, showed me how to deal with discipline, and overall, personally, he’s given me life lessons as a man so he’s definitely the most memorable part of this experience.”

Warren got into education at the advice of his grandmother.

“I love teaching people about sports, and I was talking to my grandmother and she said, ‘You love playing sports, you love showing people different things, have you ever thought about teaching?’ And just that conversation alone with my grandmother led me to teaching and it’s been a wonderful experience,” he said.

Warren has taken a new job as principal in Virginia Beach.

Warren is a fearless leader that always puts children first. He will be greatly missed,” she said.

CLEO SYMONE-SCOTT is the communications and social media coordinator at Franklin City Public Schools. Contact her at 569-8111, ext. 5502 or email cscott@fcpsva.org.

NEWSOMS The 2020-2021 school year may be starting off a bit differently with COVID-19, but the deep appreciation Meherrin Elementary... read more