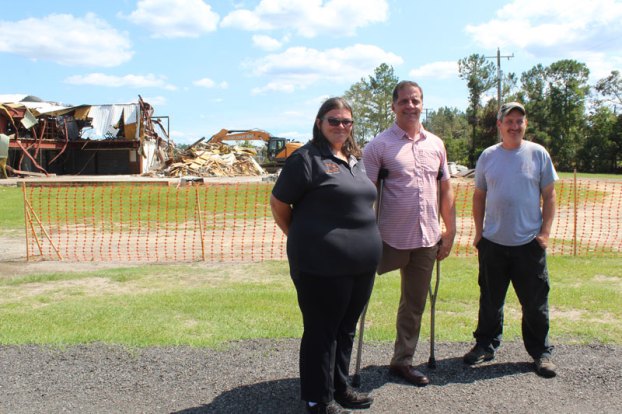 Daniel Gade is flanked by Christina and Ed Griggs at the site of where the couple's business was destroyed by a tornado following a tropical storm in the early morning of Aug. 4. Gade, who is challenging incumbent Sen. Mark Warner, visit the Griggs on Sunday afternoon. -- Stephen H. Cowles The Tidewater News

Griggs will grow back as sure as grass does

Even though a tornado practically flattened Griggs Lawn and Tractor LLC last month, the business is expected to re-blossom by next spring.

That’s according to Ed and Christina Griggs, owners, who confirmed their rebuilding plans on Sunday afternoon. The couple’s shop was one of several victims of the tornado spawned by Tropical Storm Isaias in the early morning hours of Aug. 4. Given the hour, no one was injured at Griggs or the other nearby damaged businesses.

On Sept. 6, the Griggs met and spoke with Daniel Gade, a Republican who is on the campaign trial to challenge Democratic incumbent Mark Warner for a senatorial seat in Congress.

Christina said to the candidate and a small group of supporters that what’s been missing has been any kind of inquiry or visit from any state elected official since the storm.

“We’ve been ignored by Virginia government. There’s been no one. I haven’t seen nobody,” she said.

Gade said there’s “an arrogance in Richmond and D.C. that rural people don’t matter … everybody matters.”

About the apparent absence of visits from the governor or state senator and delegate, Ed added, “It’s not a birthday party. You don’t need an invitation. You’re invited if fellow citizens are in trouble.”

As to any financial estimate of damages, he said the insurance company estimates them in excess of $1 million.

“We will rebuild,” Ed said, explaining that it will be at least two months before they can even get started. The goal is to reopen at the same site by spring.