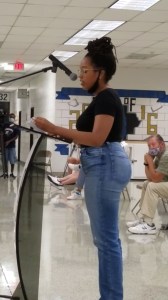 Akilah Frye of Carrollton said the presence of a Confederate monument outside a courthouse, like Isle of Wight’s, “speaks volumes” to the thousands of African Americans who go to court each day. Stephen Faleski | The Tidewater News

Isle of Wight residents for and against removal of the county’s Confederate monument have now had their say, but the county’s Board of Supervisors hasn’t picked a date yet to vote on the statue’s fate.

On Thursday, over 40 people spoke — about 43% in favor of removal and 56% against — during a public hearing on the matter held in the cafeteria of Smithfield High School to accommodate the crowd while maintaining social distancing in light of the COVID-19 pandemic.

Changes to state law, which took effect July 1, require such a hearing before any locality can legally remove, relocate, cover or add signage contextualizing its monuments. Erected in 1905 by the United Daughters of the Confederacy, the Isle of Wight monument depicts a Confederate soldier standing atop a granite base engraved with the following words:

“Isle of Wight’s loving tribute, to her heroes of 1861 to 1865. They bravely fought. They bravely fell. They wore the gray. They wore it well. Bright were the lives they gave for us. The land they struggled to save for us, will not forget its warriors yet, who sleep in so many graves for us. They bleed – we weep. We live – they sleep … Glorious is his fate, and envied is his lot, who for his country fights and for it dies. There is a true glory and a true honor: the glory of duty done, the honor of integrity of principle.”

The monument is located in front of the county’s circa-1801 courthouse, a building that now houses the county’s Board of Supervisors boardroom and its Planning and Zoning department offices.

Malcolm Clark, a 91-year-old Carrollton resident whose grandfather fought for the Confederacy, said he favored keeping the monument where it is.

“I was named after my grandfather, Malcolm Alexander Clark … he was a strong supporter of states’ rights and the economic culture aspect of each of the sovereign states, even though it included slavery,” Clark said.

Clark then told members of Isle of Wight’s Board of Supervisors the story of how his grandfather had saved the life of a wounded Union soldier while on a cavalry patrol.

“The soldier thanked him for saving his life and said, ‘All I have to give you is this gold pen’ … my grandfather cherished that pen throughout the rest of the Civil War,” Clark said. “He gave that pen to my oldest brother, who kept the minutes of a small Methodist church with it for the next 60 years … each time I see that statue in front of the courthouse, I pray that I can have the same value toward human life that my grandfather had.”

“There are still concentration camps in Germany, one of them that members of my family escaped from … they’re still standing,” she said. “They’re offensive to me, but I want them to stay there. I want people to remember what they represent. I want people to learn from the history and I want that to carry forward so it’s never repeated again.”

Akilah Frye of Carrollton, however, was in favor of removing the monument.

“Twenty percent of residents in Virginia are Black but 43% of those in jail and 53% of those in prison are Black,” Frye said. “Some may not understand the symbolism a Confederate statue in front of a courthouse has, but it speaks volumes to the thousands of African Americans that go to court daily. The system was made to defeat us. I don’t expect white people to understand what it means to be Black in America, but I do hope that they use their privilege to learn about our pain and suffering … We don’t say Black Lives Matter to be hateful towards other people, but we say it and we speak for those, of fathers shot seven times in the back in front of their sons, women shot in front of their boyfriends in their houses, men crying out with knees on their necks that they can’t breathe. So I hope that if you love God so much, that you follow His one and only commandment, which is love your neighbor as you love yourself.”

“I haven’t heard one person that’s arguing for destroying the monument,” added Che Mullings of Windsor. “I have yet to hear anybody say they wanted to erase history. I do believe that nobody is trying to rewrite history at all. That monument should not stand at a courthouse. A courthouse represents justice, it represents equality, and if I wrote a 500 word essay on the Confederacy, I promise you justice and equality would not be two words I would use. I just haven’t heard one argument for why the monument should stay on courthouse ground.”

“For the United States to be as ethnically and culturally diverse as it is, I find it odd that the only history that’s widely accepted or part of grades K-12 required curriculum is the one-sided story told from the point of view of a white man,” said Karra Johnson of Smithfield.

As of Thursday morning, 225 people had signed the Isle of Wight NAACP’s petition on Change.org calling for the removal of the monument, and another 225 had signed Carrsville resident Volpe Boykin’s petition to keep the monument where it stands. Boykin had spoken on behalf of a group of 10 people, allowing him six minutes of speaking time rather than four. Using this extra time, he stated that many Confederate soldiers had been drafted, and called the nationwide push to remove Confederate monuments part of a “Marxist agenda.”

“Take down our monument … you put your stamp of approval on everything else you see that the Marxists are doing in this country,” Boykin said.

In the days leading up to the hearing, the Newport News-based Magruder-Ewell chapter of the Sons of Confederate Veterans launched an online campaign to recruit out-of-county residents to attend and/or sign up to speak in defense of the monument.

“The Board of Supervisors have voted that any comment taken on this email address, comments@iwus.net, will be given the same weight as if you appeared before them in person … They do not ask if you are an Isle of Wight County citizen (we suggest you just make your comment and put only your name at the bottom),” the group posted to its Facebook page on Aug. 22. “This is critical and can save this monument. This needs to go out by all means necessary to everyone in and outside of Virginia.”

“If you are tired of seeing the destruction of your history and want to fight back — we need your presence,” the group posted again on Aug. 28. “You do not need to speak. Just your presence wearing a red ‘Save our Monument’ sticker will count when the Supervisors look out at you.”

According to County Attorney Bobby Jones, the county received more than 90 additional emailed remarks, though some were stricken from the record due to those writers choosing to speak in person instead. The county continued accepting emailed remarks through 11:59 p.m. that evening.

Even if the Board votes in favor of removal, the statue may remain at its current location for at least the next 30 days. That’s the minimum amount of time state law requires that localities offer their monuments slated for removal to museums, historical societies, other government entities or battlefields. Localities, however, are under no obligation to accept such offers, as the law makes clear that local governing bodies shall have sole authority to determine the final disposition of their monuments.

Some localities, such as Surry County and Virginia Beach, have removed their monuments only days after their respective governing bodies voted to do so while they awaited any offers.