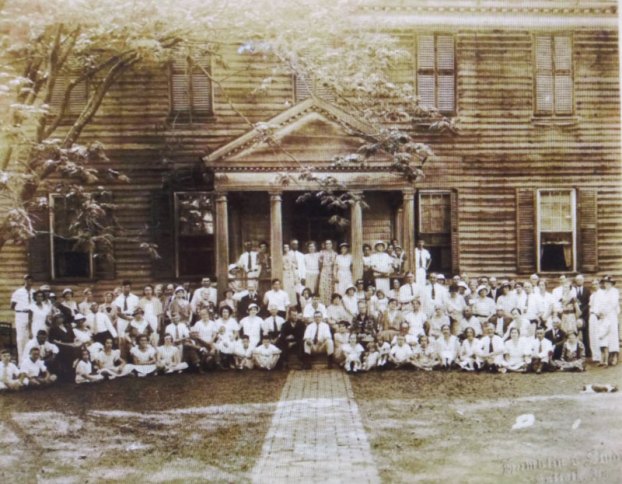 The people of Southampton County went on record for better highways Wednesday by assembling, 3,000 strong, in Sebrell at “Charlie’s Hope,” the ancestral home of the Urquhart family, for a monster good roads rally in connection with the annual sociability run of the Tidewater Automobile Association.

Speeches from prominent good roads advocates, promoters and builders, including State Highway Commissioner Coleman, were given in strong support of the effort to improve and modernize Virginia’s highways especially those roads, if improved, that would provide connectivity between rural communities and much better access from those areas to the cities of Norfolk and Richmond. Highway improvements would facilitate and accommodate the rapidly developing over-the-highway truck transportation movement.

To promote and highlight the movement, a “Ship-by-Truck” convoy left Norfolk Tuesday morning, destined for Sebrell: 20 trucks with trailers and a pilot car under the direction of Mr. J.H. Schieswohl. They passed through Portsmouth, Norfolk County, Nansemond County and Isle of Wight County on their way westward. The entire trip assumed the nature of a triumphal procession, hospitality becoming more bountiful and enthusiasm increasing with every succeeding stop. At Suffolk, Holland, Carrsville and Franklin — where stops were made — there were parades, band concerts, speeches and refreshments in profusion for the members of the truck party.

Upon their arrival in Franklin, members of the truck party and many other invited guests were served supper at the Stonewall Inn on Main Street. Next, the U.S. Navy Post Band from Norfolk gave a most enjoyable concert at a platform erected near the Inn and Sol Rawls’ Garage on Fourth Avenue. Several hundred Franklin people, with many visitors from neighboring communities, assembled around the platform.

Following the concert, Major R.E.L. Watkins extended a cordial welcome to the honored guests on behalf of the Town of Franklin; and speeches were made by Mr. J.S. Schieswohl on the “Ship-by-Truck” movement and by Mr. A.R. Kroh of Akron, Ohio, on “Modernization of the Farm.”

Both speakers took occasion to pay a well-merited tribute to the good work of Franklin’s General Cecil C. Vaughan Jr. in making possible the success of the Tidewater Automobile Association’s run through Southampton and for his untiring interest at all times for the continual development and improvement of Virginia’s rural highways.

Wednesday morning, after an elaborate and beautiful street parade through Franklin, the truck convoy got under way for a stop at Courtland — the County Seat. There, a community band played several selections. A committee composed of Mayor E. Whitfield, Honorable W.J. Story, Dr. E.F. Reese and E. P. Westbrook welcomed the party and distributed delicious and generous portions of ice-cold watermelons for the refreshment of the truck drivers and members of the band. After that, and another speech by Mr. Kroh, the party took the “Ridge Route,” as the highway through Southampton is called, and proceeded on for Sebrell and “Charlie’s Hope,” augmented by hundreds of automobiles from all sections of Southampton and adjoining counties.

At Sebrell, the autoists and truck convoy were joined by many members of the Tidewater Automobile Association, including some of its directors: City Manager Charles Ashburner, of Norfolk; City Manager W.B. Bates, of Portsmouth; T.H. Birdsong and W.G. Elam, of Suffolk; W.J. Holland, of Holland; General C.C. Vaughan Jr. and Sol W. Rawls, of Franklin; and Dr. E.F. Reese, of Courtland.

Also, it is conservatively estimated that in the crowd there were at least 500 members of the Tidewater Automobile Association from the several counties and cities taking part in the day’s festivities.

At “Charlie’s Hope” the grounds selected made an ideal spot for holding a summer picnic. And the thanks of everyone in any way connected with the day’s program are due to the Misses Urquhart for the generous way in which they threw open their hospitable gates for the occasion. Under the magnificent oaks of this old estate, automobiles were parked by the hundreds, the platform for the speakers and guest of honor was built, the long tables were set for the dinner, and many groups of people, young and old, enjoyed the grateful shade throughout the day. The day was all too short in the pleasure it brought to every guest of “Charlie’s Hope.”

Many speeches promoting the use of motor trucks and the further development of the “Ridge Route,” which is the proposed superhighway running from Norfolk to Richmond, by way of Suffolk, Holland, Carrsville, Franklin, Courtland, Sebrell, Littleton, Homeville and Petersburg.

As for the dinner, which was served at the conclusion of the speaking, one had to be there, eat it himself, and watch others enjoy it to have an adequate conception of the amount of food, which was so charmingly served by the ladies, or of the astonishing gastronomic feats performed by the hungry crowd.

NEWSOMS The 2020-2021 school year may be starting off a bit differently with COVID-19, but the deep appreciation Meherrin Elementary... read more