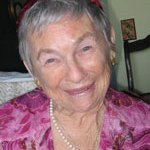 She was born on Sept. 8, 1934. She had been a resident of Holly Cross Nursing Home in Burtonsville before succumbing to pneumonia and dementia.

June grew up in Sedley, went to Courtland Elementary/High School and attended Longwood College in Farmville, Virginia. While at Longwood, she met Navy Lt. Roy S. Reynolds, whom she married while putting college on hold. As a Navy wife and giving birth to three boys, the family enjoyed duty stations in Milwaukee, San Diego, Washington, D.C., Norfolk, Seattle, Brussels, Belgium and back to D.C., where Roy eventually retired and the family settled in Upper Marlboro, Maryland.

June went back to school finishing her undergraduate degree at Georgetown followed by a master’s degree from American University. She worked as a paralegal for many years and sold real estate in Southern Maryland.

June was a lover and patron of the arts in all forms. While residing in Upper Marlboro, she also became involved in the local Boy Scouts of America as a Scout leader in Troop 1038. Having a background in the law, she helped numerous scouts achieve their law merit badge.

She was an avid painter and she enjoyed dancing and sailing. She was known for her fabulous hats and friendly enthusiasm for making new acquaintances. She would light up any room. She once remarked to the daughter of her closest friend that on her gravestone she would like to have the inscription “I’d rather be dancing.”

June was preceded in death by her husband, Roy S. Reynolds; parents, Nellie and Virginius Elder; and brothers, Johnny and Jimmie Elder.

Services will be held at a later date.