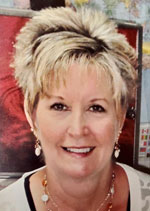 She was a native of Southampton County, and was predeceased by her father Junius “Kingfish” Pope and her brother, David Earl Pope.

Kathy was a former Southampton Memorial Hospice volunteer, and an avid knitter of socks, beanies, baby blankets for newborns and stocking caps for cancer patients and a collector of sea glass.

She was a part-time employee of Knitting Addiction in Nags Head, North Carolina.

A funeral will be at 7 p.m. on Sunday, Aug. 30, in Wright Funeral Home, Franklin, with Pastor Randy Wright officiating.

Memorial donations may be made to Sycamore Baptist Church or Harvest Christian Fellowship.