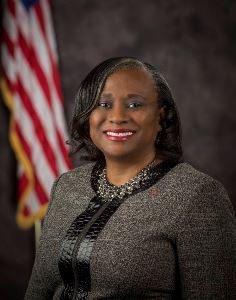 Now Lucas-Burke is facing criminal charges herself as a result of her words.

According to the summons delivered to Burke’s residence on Aug. 24, the vice mayor faces two misdemeanor charges, both for allegedly violating Section 3.11 of Portsmouth’s City Code. That code section, titled “Noninterference in appointments or removals,” makes it a Class 3 misdemeanor for City Council members to direct or request that anyone be appointed or removed from a position that reports to the city manager. According to Portsmouth’s organizational chart, the police chief is among such positions.

Per state law, conviction doesn’t carry the possibility of jail time, just a fine of up to $500 for each offense. But Portsmouth’s City Code adds the additional penalty of the council member having to forfeit his or her office.

Portsmouth isn’t alone in having such a law on its books. In Suffolk’s city charter, a similar provision states “neither the council nor any of its members shall direct the appointment of any person to or his removal from any office or employment by the city manager or by his subordinates.”

This section of code, however, doesn’t specify whether violation constitutes a Class 3 misdemeanor, nor does it state if a council member expressing an opinion on someone’s performance, in-person or online, would constitute such a violation.

Suffolk’s code of ethics for City Council members further states that a member’s concerns about the performance of a city employee shall be discussed privately with the city manager and that members of City Council shall at all times refrain from abusive conduct, threatening or intimidating language or gestures, personal charges or verbal attacks concerning the character or motives of other council members, members of city boards and commissions, city authorities, city staff or the public.

Lucas-Burke’s exact words in a statement she posted to Facebook on Aug. 19 were, “I think she [Greene] has clearly lost the confidence of this Council and the City and should be terminated.” Lucas-Burke made her remarks in reference to Greene’s announcement of two charges — conspiracy and “injuring” a monument valued over $1,000 — against the elder Lucas on Aug. 17. Those charges are in connection with the senator’s presence during a June 10 protest at the city’s Confederate monument, which resulted in injuries later that evening when protesters beheaded four Confederate figures attached to the monument and pulled one over, causing it to fall on a man. Portsmouth has since begun removing the monument after voting unanimously in late July to take it down.

Smithfield and Windsor in Isle of Wight County have similar prohibitions on Town Council members interfering in the employment status of those appointed by their respective town managers, but those code sections don’t specify the penalty for violation.

According to Smithfield Town Manager Michael Stallings, who previously served as Windsor’s town manager through April, in both towns the police chief works directly for the town manager. Council members confirm the hiring of the chief with a vote, but the decision to hire and fire is the sole discretion of the town manager. This is also the case in the city of Franklin.

Yet Franklin’s city charter doesn’t appear to outright prohibit council members from voicing their confidence or lack thereof in city officials. It just states that council members are prohibited from giving orders to subordinates of the city manager, either publicly or privately.

Thomas DuBois, a Portsmouth resident, filed the complaint resulting in Lucas-Burke’s charges on Aug. 23, entering the city magistrate’s office with an entourage of supporters.

Lucas-Burke is up for re-election this November and is running against nine other candidates for three available seats. DuBois is not among her opponents on the ballot.

“I don’t know him at all,” Lucas-Burke said when contacted by the newspaper for comments.

As for the charges, she called them “obscure” and something that’s “never been tried anywhere.”

She then suggested that someone other than DuBois may be “leading these charges.”

“To be charged with a misdemeanor is just absurd,” she said.

Lucas-Burke is scheduled to appear in court at 9 a.m. on Sept. 2 according to the summons. Her attorney is Joseph Lindsey, a member of Virginia’s House of Delegates representing Norfolk.