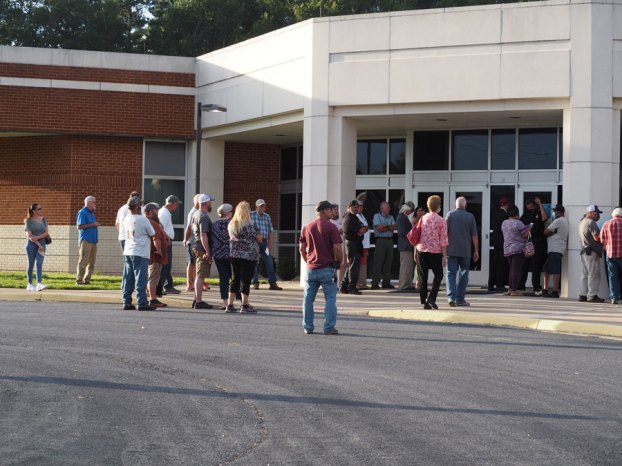 With Paul D. Camp Community College’s Workforce Development Center auditorium filled to the limited capacity allowed under Virginia’s COVID-19 restrictions, those waiting to speak at the public hearing needed to wait outside for seats to open up. Stephen Faleski | The Tidewater News 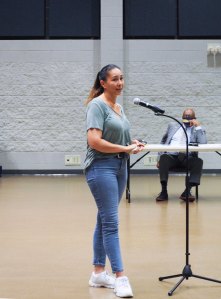 Veronica Hook, who told the Council she’s half Black and half white, said she favored keeping the monument where it is. Stephen Faleski | The Tidewater News

Franklin residents for and against removal of the city’s Confederate monument have now had their say, but the City Council doesn’t expect to vote on the statue’s fate until September.

Monday evening, over two dozen people spoke — most opposed to removal — during a public hearing on the matter, which was held in Paul D. Camp Community College’s Workforce Center to accommodate the crowd while maintaining social distancing in light of the COVID-19 pandemic. Changes to state law, which took effect July 1, require such a hearing before any locality can legally remove, relocate, cover or add signage contextualizing its monuments.

Erected in 1911 by the Agnes Lee Chapter of the United Daughters of the Confederacy, the monument depicts a stone carving of the Confederate battle blag and bears the inscription, “love makes memory eternal, to our Confederate dead.” After World War II, the monument was moved to its current location in Monument Park, the land for which was donated to the city by the Camp family.

Among those advocating for the monument to remain at its present location in Monument Park was Veronica Hook of Clay Street, who told the Council members she was “half Black and half white.”

“I feel the monument needs to stay where it is,” Hook said. “While I feel this is a racially charged issue, I also feel there’s history … I knew it was there when I bought my house a few years ago. I feel that Franklin is diverse enough, and the people are caring enough here, that it doesn’t have to become an issue.”

“There is no evidence that any monument was ever erected to intimidate Black people,” added Volpe Boykin of Carrsville. “Everyone that has seen the destruction of many monuments of all kinds currently going on knows this really has nothing to do with monuments, but is all about the spread of a Marxist agenda. If you vote to remove this memorial to the dead, you are putting your stamp of approval on that agenda.”

Carla Sumblin of South High Street, however, took issue with anyone denying the monument’s association with the South’s Jim Crow era.

“For those who would want to change the narrative of what this Confederate statue means, we all know they were defending slavery,” Sumblin said. “The Confederate flag, the symbol was resurgent with the KKK. This flag on the back of the statue, make no mistake … we know what it means.”

“This is an opportunity for you all and this community to heal,” said Terrance Johnson of Carrsville Highway. “It seems evident the nation is trying to self-correct. For me, it’s not about a personal opinion. It’s about principle … It’s difficult to heal when you still have those wounds remain open. Remove it and move it to a cemetery or a place more appropriate.”

Some speakers took issue with the cost to taxpayers to move the monument. City Manager Amanda Jarratt had stated during a previous City Council meeting that Franklin had received an estimate of $50,000 to move the monument to Polar Springs Cemetery, where city staff plan to construct a concrete pad in place of a little-used gazebo should the Council vote to relocate the statue.

Even if the Council votes in favor of removal come September, it may remain at its current location for at least the next 30 days. That’s the minimum amount of time state law requires that localities offer their monuments slated for removal to museums, historical societies, other government entities or military battlefields. Localities, however, are under no obligation to accept such offers, as the law makes clear that local governing bodies shall have sole authority to determine the final disposition of their monuments.

Other localities such as Surry County and Virginia Beach, have removed their monuments only days after their respective governing bodies voted to do so.

In Days Past – The Slick Hill Gang

FRANKLIN A reader going through clippings found this image that was published on Jan. 18, 1973, in the former Penny... read more