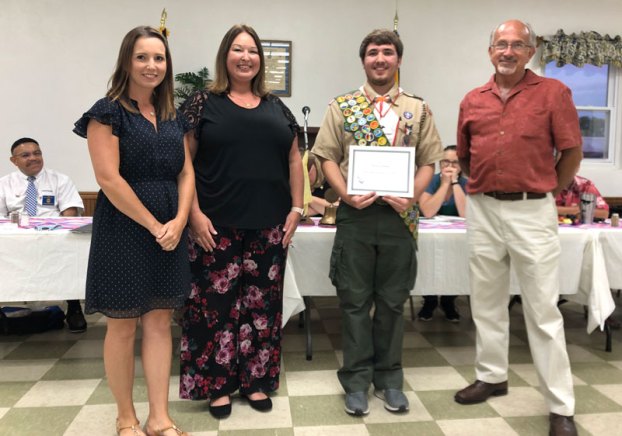 The sixth annual Eric V. Henderson Memorial Scholarship was presented to Noah South of Carrsville Troop 37 on Aug. 10, in the Carrsville Ruritan Club.

Eric Henderson was an Eagle Scout with the now disbanded Troop 28 of Franklin. He continued with his love of scouting through his mentorship with Campus Scouts while attending Virginia Tech. He passed away in January 2014. It was this love of scouting that prompted the family to start the Eric V. Henderson Memorial Scholarship that fall by offering a $1,000 award to a local Boy Scout.

The recipient of the scholarship must be in good standing of the troop with acceptance into a full-time college and hold a minimum GPA of 3.0. He must demonstrate leadership, character and heart for family, friends and community by exemplifying the Scout Oath and Law in his daily life as well as to assist others and conduct himself in such a way that warrants similar recognition.

Noah South is the son of Greg and Elizabeth South of Courtland, and is an Eagle Scout with Troop 37. He graduated from Southampton High School with a weighted 4.83 GPA, and will attend Old Dominion University, majoring in maritime and supply chain management. He has exceled academically as a National Honor student and a member of the Beta Club, as well as standing out on the track field as both an athlete and a leader serving as captain.

Noah is described best by his Scout leader, Phillip Bradshaw, “He is always willing to assist and work with the younger scouts in the troop. He conducts several classes for the various ranks and Merit Badges while continuing to excel with earning his own merit badges. He is always stepping up to take on responsibilities in the troop, pack and lodge. Noah exemplifies the Scout Oath and law in his daily living. He lives by the three parts of the Scout Oath, duty to God and country, duty to others and duty to self.”

When faith is doing

By Nathan Decker In my humble experience, unless you are a lawyer, any day in court is a bad day.... read more