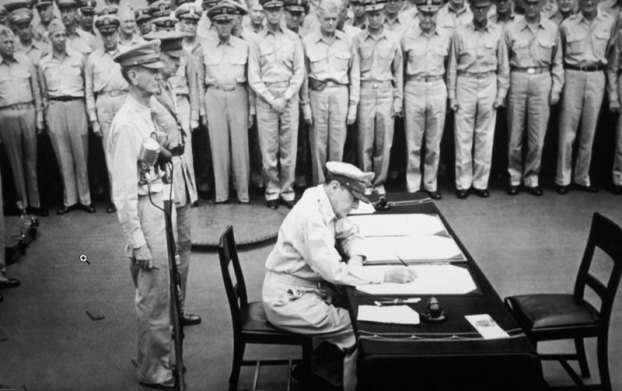 Looking Back: Franklin celebrates victory over Japan – WWII is over!

A noisy and exuberant celebration took place on the streets of Franklin last Tuesday evening, Aug. 14. What was it all about? The end of World War II! Prompted by a radio announcement — at about 7:00 o’clock — that Japan had surrendered, large crowds of people spontaneously gathered in several areas around town, mostly on Main Street, to celebrate the war’s end. The hilarity largely found expressions in the tooting of auto horns and much clamoring and dancing along the streets of Franklin — although there were many other ways the crowds celebrated. But, there was no vandalism of which we have heard. Sirens, emanating from the fire department and from various other sources, were blasting constantly.

The sailors from the Franklin Naval Air Station here joined in on the celebrations — with a will — and everybody took part in making the “welkin” ring.

(NOTE: The U.S. Navy was a major part of the Franklin/Isle of Wight/Southampton scene from March of 1943, when the Franklin Municipal Airport was converted for military use, until the end of World War II. The U.S. Navy mission at Franklin included acceptance and temporary storage of aircraft from Norfolk’s U.S. Naval facilities and transference of that aircraft from that pool to wherever it was needed — including operational squadrons based on awaiting aircraft carriers and other strategic airbases. Franklin Naval Air Station, during its existence, handled close to 12,000 aircraft — mostly “F6F Hellcats” and “SB2C Helldivers.” As many as 500 aircraft were positioned on the ground at any given point in time.)

All of the celebrations, described above, were in response to Japanese Emperor Wichinomiya Hirohito’s acceptance on Aug. 14, 1945, of the terms of the “Potsdam Declaration” which came out of a conference in Potsdam, Germany, and subscribed to by the United States, Britain and China. Essentially, the Potsdam declaration stated that if Japan did not surrender, they would face prompt and utter destruction. President Harry S. Truman announced Japan’s surrender, and that it would be effective on Aug. 15, over international radio broadcasts. The surrender came about three years, eight months, and one week after the attack on Pearl Harbor on Dec. 7, 1941.

Obviously, contributing greatly to Hirohito’s surrender was the fact that earlier — on Aug. 6, 1945 — a B-29 bomber superfortress airplane, named “Enola Gay” and piloted by Colonel Paul Tibbets, had dropped an atomic bomb on Hiroshima; and, three days later, a B-29 “bockscar” plane piloted by Major Charles Sweeney, dropped another atomic bomb — this time, on Nagasaki.

(Earlier, the war in the European Theater of the war had ended. V-E Day, 8 May 1945, is officially designated as the day that Nazi Germany surrendered to the Allied Forces (United States, Great Britain, France, and Russia) thereby ending World War II in Europe. Actually, German military leaders had signed surrender documents at several locations in Europe on the day before. Adolph Hitler, realizing his was a lost cause, had died in his Berlin bunker, from suicide, on 30 April 1945.)

(Italy, under the control of Benito Mussolini, was allied with Germany. On July 25, 1943, following huge battle defeats in Italy by Allied Forces, Mussolini, as Italy’s head of government, was dismissed. Later, on Sept. 12, 1943, Hitler freed Mussolini from Italian captivity and put him in charge of a puppet regime in northern Italy. Soon afterward, General Pietro Badoglio was put in charge and sought peace with Allied Forces; an armistice was signed on Sept. 23, 1943, and Italy capitulated. On Oct. 13, 1943, Italy declared war on Nazi Germany — its one-time Axis Powers partner. On April 27, 1945, Mussolini was captured again by Italians and executed the next day.)

On Aug. 15, in further celebration of V-J Day, here in Franklin, there was a great get-together and community sing in the Franklin High school auditorium. Mayor R. H. Powell presided; J. Edward Moyler made a patriotic speech; the Rev. E.W. Aaron, of High Street Methodist Church, read the 46th Psalms and made a fervent prayer of thanksgiving for peace; and a number of American songs and popular airs of World War I and World War II were song by the large crowd with Ben Stevenson leading and Mrs. Sol W. Rawls accompanying on the piano.

President Harry S. Truman has asked the people of America, generally, to make Sunday, Aug. 19, 1945, a day of thanksgiving and prayer throughout the churches of our land. World War II is over!