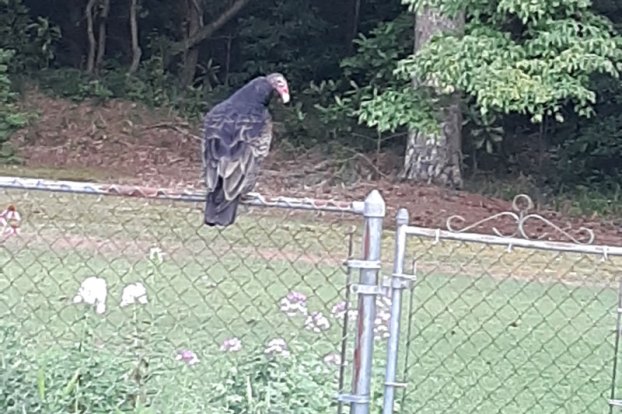 “Petey” hangs out on the chain-link fence at the home of Master Naturalist Mary C. Foster. He's recently taken to waiting for table scraps from her kitchen. Submitted | Mary Catherine Foster

Not so cuddly visitor

Before darkness sets in each day, I take any table scraps and refrigerator garbage to the tree line about 150 feet from my back door for the creatures of the night. While doing the supper dishes one evening in late March, as I stood at the kitchen sink, I saw a turkey vulture (aka turkey buzzard) having a free meal at my dump site. He seemed to learn my schedule and would be in place at least three times a week. Sometimes, when there were no table scraps, he moved up to the chain-link fence 75 feet from the back door and in a direct sight line to the kitchen window. He was making me a little uncomfortable with his small wrinkled red head hung low and his hunched back creating a mournful pose.

How could something so unattractive up close be so charming soaring high in sky barely flapping a wing for hours — just gliding along, rocking or tilting unsteadily, holding its wings in a shallow V. Because of their 6-foot wingspan, turkey vultures look much larger than its 4.5 pound weight would indicate. There is a purpose to their gliding flight. Turkey vultures have a keen sense of smell and can locate carrion a mile away. Their preference is for carrion two to four days old and they won’t eat extremely rotted carcasses. Turkey vultures are scavengers and do not kill their prey.

Vultures are perceived as loathsome because of their disgusting feeding habits. They have sharp beaks that can tear through tough hide. They feed by thrusting their bald head into the body cavities of rotting animals. Their bare, featherless heads are kept relatively clean as they feed. Specialized enzymes and bacteria allow them to eat contaminated meat and after stepping into a carcass, vultures will expel their waste onto their legs. The uric acid kills any bacteria they may have picked up from the dead animal.

As a consummate scavenger, turkey vultures dispose of carrion that would otherwise be a breeding ground for diseases. Not that any of this encourages humans to take too close a look. Turkey vultures can throw up if harassed and send it 6 feet or more. Even their chicks can do this.

In the United States, it is illegal to take, kill or possess a turkey vulture.

Now, about the quality of my table scraps. Maybe, Petey (his given name) has gourmet taste.

Blue Mistflower (Conoclinium coelestinum) grows wild in nearly every county in Virginia. This was photographed by the author at the... read more