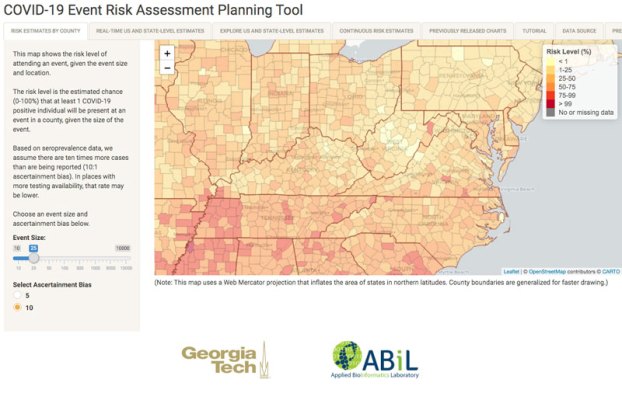 Georgia Tech’s event risk assessment planning tool allows users to gauge the risk of at least one COVID-19-positive person showing up at an events ranging in size from 10 people to 10,000. Courtesy | Georgia Tech

If someone were to host a gathering of 25 people in Southampton County — say, a birthday party — there’s currently a 46% chance that at least one of the guests will be carrying the COVID-19 virus.

In Norfolk, which has become one of the new epicenters of the virus in Hampton Roads, that same gathering of 25 people carries a 62% risk. If that gathering grows to 100 people, exposure becomes a 98% risk — almost a certainty.

That’s according to data Georgia Tech researchers have compiled to track the risk of exposure to the novel coronavirus on a county-by-county and state-by-state basis. The resulting map and dashboard, available to the public at covid19risk.biosci.gatech.edu, allows users to gauge their risk of exposure in each locality based on the size of an event, with options ranging from 10 people to 10,000.

According to Georgia Tech Assistant Professor Clio Andris, a member of the dashboard’s design team, the county-by-county risk assessment assumes every confirmed case in that locality has managed to infect between five to 10 people, each of whom may be undiagnosed and asymptomatic but still able to pass the virus onto others.

It does not, however, treat outbreaks differently than community spread, Andris confirmed. This means that if 40 residents at a nursing home tested positive for the virus in April and have been quarantined ever since, the system would weigh the risk of exposure to these people no differently than 40 positive individuals who don’t live or work together.

According to data from the Virginia Department of Health, 49 of Southampton County’s 285 total cases and eight of its 13 COVID-19-related deaths are tied to an outbreak at Accordius Health of Courtland, a long-term care facility that up until April was known as Courtland Health and Rehab. Another 85 cases are tied to Deerfield Correctional in the Capron area, 78 of those being among inmates and seven among staff.

The city of Franklin, by comparison, has 188 confirmed cases to date, yet the risk of exposure at a gathering of 25 people was listed at 91% as of Aug. 12. Franklin has a population of just under 8,000, according to 2019 estimates from the U.S. Census Bureau, while Southampton has more than 17,000.

“We calculate the risk as a ratio of the cases to the total population,”Andris said. “So when there is a low population … it boosts the rate.”

According to Dr. Todd Wagner, director of the Virginia Department of Health’s Western Tidewater Health District, the vast majority of COVID-19 cases district-wide continue to be from smaller social gatherings such as backyard barbecues and birthday parties. The health district encompasses all of Isle of Wight County, Southampton County and the cities of Franklin and Suffolk.

Andris further confirmed that the risk of exposure does not necessarily equate to the risk of infection, meaning even if someone unknowingly carrying the COVID-19 virus showed up at an event, practicing social distancing and wearing face masks could reduce the risk that the carrier would pass the virus on to other attendees.

The reverse, unfortunately, is also true.

“There can be the ‘super-spreader’ phenomenon where one case can infect a large number of people,” Wagner said. “So we don’t want to presume that just because there is a small number of cases predicted at an event, that doesn’t mean that there can’t be a large number infected.”

Family comes through two storms — together

Around 3:15 a.m. on Aug. 4, a tornado born of Tropical Storm Isaias touched down in Courtland. Scott Evans and... read more