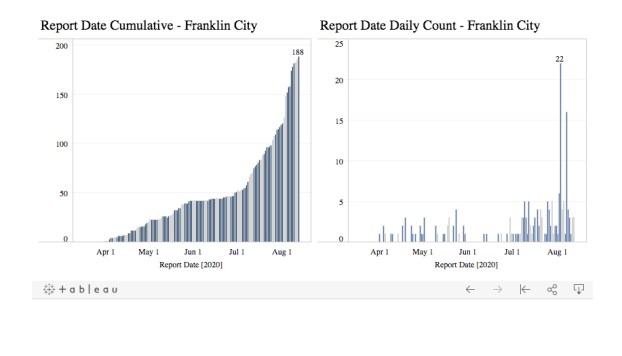 Franklin saw a record-breaking surge of 22 COVID-19 cases in a single day on Aug. 3. Prior to that, the city had seen no more than five new cases a day since the pandemic began. Courtesy | Virginia Department of Health

Franklin was the 27th worst coronavirus hotspot in the nation as of Monday, according to a New York Times analysis that measures weekly cases per capita.

That day, Franklin reported 182 confirmed cases, 58 of which were diagnosed in the past seven days. By Tuesday, the city had dropped to 81st place. Taylor County, Fla. — which has 965 total cases, 569 of which were diagnosed within the past seven days — has had the unfortunate distinction of being the nation’s No. 1 hotspot for the past few days, according to the Times’ analysis.

On Aug. 3, Franklin reported a record-breaking single-day surge of 22 new cases. Another 16 were reported Aug. 7. Prior to these dates, the city had seen no more than five new cases per day since the pandemic began.

The Western Tidewater Health District is also reporting a new COVID-19 outbreak, this one tied to a healthcare facility, but according to Bon Secours spokeswoman Jenna Green, Southampton Memorial Hospital isn’t the source. In fact, the 22 Franklin cases reported Aug. 3 aren’t attributable to any large-scale outbreak the Virginia Department of Health is currently tracking, according to Western Tidewater Health District Director Dr. Todd Wagner.

“The case spike … was perhaps somewhat attributable to the large numbers of recent testing we did at several events in the Franklin area,” Wagner said. “There certainly appears to be a significant level of community spread … continuing to occur throughout the district, and Franklin is certainly a part of that.”

The surge has brought Franklin’s percent positivity rate, this being the percentage of people within the city testing positive for the virus, to 9.8% — only slightly higher than Southampton County’s 9.5% rate or Isle of Wight County’s 9.4%. Both counties have significantly larger populations and case totals than Franklin.

Wagner couldn’t say which health care facility was the source of the latest outbreak, but confirmed that it was indeed a health care facility as opposed to a nursing home. As of the July 2 report, 46 health care workers in the district had tested positive for the virus since the pandemic began. By Tuesday, that figure had increased to 54.

According to Wagner, VDH contact tracing investigations in the Western Tidewater Health District continue to show gatherings of family and friends as the predominant cause of non-outbreak-related community spread.

“I still believe there is often a bit of complacency in some of these situations where people may believe that since they know all of those invited/attending, they couldn’t be infected, which we certainly know is not the case.”

FRANKLIN A staff member of the Franklin City Public School Division has tested positive for the novel coronavirus (COVID-19), according... read more