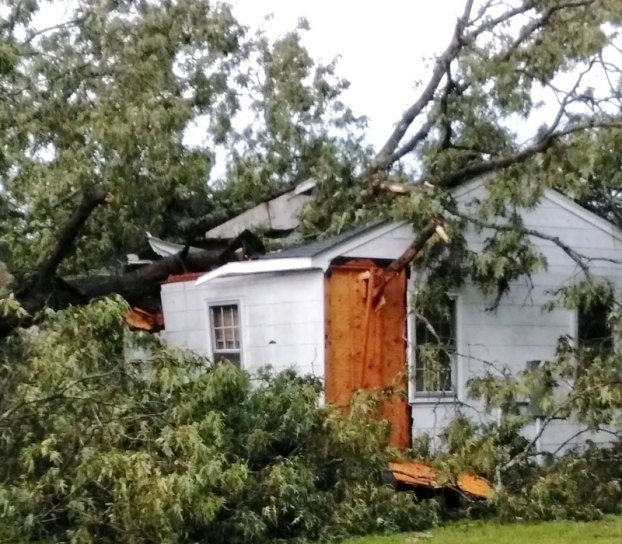 In the late afternoon of July 28, a storm pushed a huge oak tree onto the house where Scott Evans, Shannon Howington and their children were staying on Wakefield Road in Southampton. A few days later they took refuge at the Palm Tree Inn in Courtland. -- Submitted Scott Evans

Family comes through two storms — together 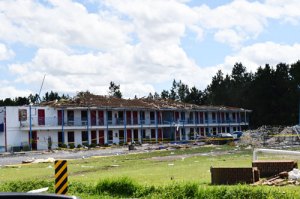 Around 3:15 a.m. on Aug. 4, a tornado born of Tropical Storm Isaias touched down in Courtland. Scott Evans and his family were staying at the Palm Tree Inn, which was among the several businesses and homes severely damaged that morning. No one was seriously hurt. — Mitzi Lusk The Tidewater News

Even though storms have forced him and his family from one place to the next — twice! — he’s keeping his sense of humor.

“I can only laugh,” Evans said during a phone interview. In fact the conversation was frequently punctuated by his laughing. “There’s no point being down in the dumps.”

The troubles began on July 28. He and the family — including spouse Shannon Howington and children were staying in a rented home on Wakefield Road in Southampton County.

“Luckily, I had just gotten home when a bad storm came through at 5:30 p.m. and a big oak tree in front fell hitting two bedrooms, a bathroom and the living room. The fire department came out. There was no fire, the electricity didn’t even go out. They cut the power off [for safety]. We tried to find my wife’s purse. Twenty minutes later, another storm came through and ripped off the roof of the overhang.

Through it all, everyone was uninjured.

“My mother-in-law lives in Franklin and picked us up. We spent two night there and then went to the Palm Tree Inn and were originally going to be there for 10 nights.”

Then in the early morning hours of Aug. 4, Tropical Storm Isaias moved through Western Tidewater, and from it spawned a tornado.

Evans recalled that while living in Currituck, North Carolina, he would stay awake when hurricanes blew through. This past Tuesday he didn’t go to bed until 2 a.m.

“At 3:15 the wind picked up outside. We grabbed the children and went into the bathroom. Our room was on the office side where the roof was completely torn off,” he said. “It was chaotic.”

After the tornado passed, everyone came outside. Evans said one of the motel office personnel told him that all but two rooms were occupied.

Again, no one was seriously hurt.

The family is back with the mother-in-law for the time being as they put back the pieces of what’s left.

“We lost everything,” he said, adding his gratitude that at least the cell phone service has stayed up, enabling calls to insurance companies.

He also still has his work with the Franklin City Public Schools and Shannon at the Children’s Center.

The local Red Cross has since provided them with a gift card to use in getting clothes and other necessities. For anyone who wants to help, a Go Fund Me page was set up for them by a relative, Cindy DeTore, at https://gf.me/u/yjqxp7.

COURTLAND The Southampton County School Board has moved its venue for the upcoming meeting on Monday, Aug. 10. The board... read more