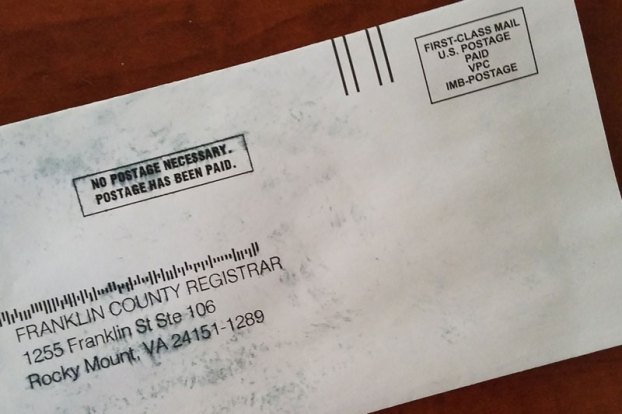 Numerous Franklin voters have received unsolicited applications for absentee ballots, which include a return envelope addressed to the Franklin County registrar rather than the registrar’s office for the city. Stephen Faleski | The Tidewater News

Franklin voters who received an unsolicited absentee ballot application from the Center for Voter Information beware — the return envelopes are addressed to the registrar for Franklin County, not the city.

As such, they will be mailed to Rocky Mount, a town located in the state’s Piedmont region.

Franklin City Registrar Jennifer Maynard said her office, the correct mailing address for which is P.O. Box 42, received numerous calls regarding the unsolicited mailings this morning.

“The best way to protect yourself, your family and your whole community during this time is to vote by mail,” states a letter included with the application. “Voting by mail ensures coronavirus cannot take away your ability to vote.”

Any voters who have already filled out and mailed the application without noticing the wrong address should still receive an absentee ballot by mail eventually.

“The application itself appears to be legitimate,” Maynard said. “If a voter happened to mail it to Franklin County, that registrar would forward it to me, but it’s not ideal.”

Maynard didn’t know exactly how many such mailings had been distributed in Franklin, but speculated that they were fairly widespread given the number of calls she has received.

“I think a whole lot of people in Franklin got this,” said Bob Luck, a resident of the Village at Woods Edge retirement community.

Southampton County Registrar Lynn Burgess said she also has received several phone calls and seen several Facebook posts on the matter but didn’t know how widespread the issue was in the county.

The Center for Voter Information, according to its website, is a nonprofit organization dedicated to providing “unbiased information about candidates and their positions on issues.” According to Maynard, it is a sister organization to the Voter Participation Center. The VPC, she said, was responsible a few years back for sending out pre-filled voter registration applications to pets and deceased people.

“I have reached out to the organization, and I have notified the Virginia Department of Elections,” Maynard said.

The Department of Elections issued the following statement in response to the Franklin situation and similar incidents in other localities:

“The Center for Voter Information recently mailed absentee ballot applications to Virginia residents. The Virginia Department of Elections has no affiliation with this group nor coordinates with any third party groups on campaign efforts. We are aware that voters in multiple localities that received an absentee ballot application were given pre-paid return envelopes addressed to the incorrect registrar’s office. The Virginia Department of Elections encourages all voters that would like to receive an absentee ballot for the November election to apply electronically on our website www.elections.virginia.gov/voterinformation.”

The department further confirmed that any applications that arrive in the wrong locality’s office will be forwarded immediately to the correct office for processing.

“If you have already applied for an absentee ballot, you do not need to submit a new application,” the department’s statement reads. “The first day that absentee ballots will be mailed is Sept. 18, 2020.”

The Center for Voter Information issued the following statement on the matter on Aug. 7:

“The Center for Voter Information recently sent vote-by-mail applications to voters in Virginia, encouraging them to safely participate in democracy. We are aware that some of the mailers may have directed the return envelopes to the wrong election offices. The issue affects the following locations: Fairfax City and Fairfax County, Franklin City and Franklin County, Richmond City and Richmond County, and Roanoke City and Roanoke County.

“Approximately half a million applications sent to eligible voters in Virginia included incorrect information, and we are working diligently to address the issues. Mistakes in our programming are very rare, but we take them seriously, and our methods overall are extraordinarily effective. In fact, we have worked with our partner, the Voter Participation Center, to successfully generate nearly 900,000 vote-by-mail applications across the country, and helped more than 5 million people register to vote in our history.

“We know that voters are on high alert as the November election approaches, and we regret adding to any confusion. Please rest assured that we are working with local election officials in Virginia to re-direct the vote-by-mail applications to the proper locations, and will rectify any errors at our own expense.”

City of Franklin voters who wish to vote by mail this November can also download the application for an absentee ballot from the city’s website at franklinva.com/government/departments/voter-registrar/forms-and-documents/. Effective July 1, Virginia no longer requires voters to declare a reason for voting absentee.

Dominion: Outage may continue through Thursday

Nearly 1,000 still without power in Isle of Wight Some Dominion Energy customers who lost power as a result of... read more