WTHD to move to Phase 1B 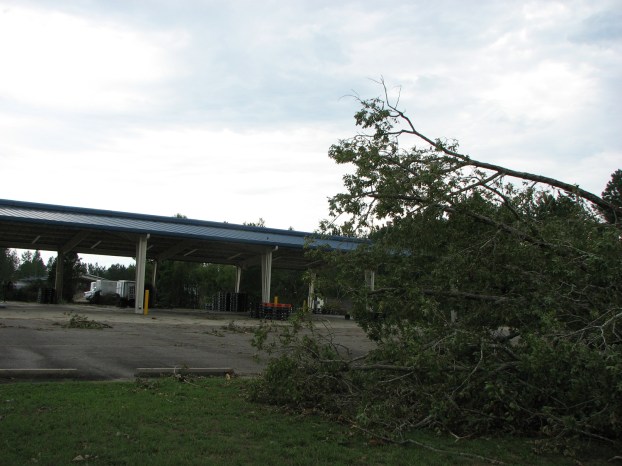 The site of Courtland’s farmers market took heavy damage from Tropicl Storm Isaias, particularly when an EF-2 tornado touched down nearby. A cold-storage-equipped warehouse suffered damage to its roof and several trees were downed. Stephen Faleski | The Tidewater News

While the building in which auctions are held weekly from June through October is still intact, the cold-storage-equipped warehouse where the produce is kept lost its roof when Isaias spawned an EF-2 tornado. Several trees in the area were also downed.

“It’s bad; you can’t work out of it,” said Monica Francis, who manages the farmers market with her father, Mike Marks.

The site, which is owned by the Commonwealth of Virginia, also serves as a warehouse for food that is distributed to state prisons.

“They had to get all their food out of here in a hurry yesterday,” Francis said.

Clark Fox of Capron is among the farmers that supplies the market with the watermelons it sells wholesale. While he’s grateful for the rain Isaias brought after repeated dry, 90-plus-degree days in July, now there’s nowhere to store his melons until they can be sold.

“The problem with watermelons is it’s a perishable crop; you can’t just leave it in the field,” Fox said. “When they’re ready, they have to come out.”

Once picked, they must be stored in a warehouse, ideally a climate-controlled one, so that they don’t get wet or exposed to sunshine, which can spoil them. The farmers market is currently looking for a temporary facility to meet this need, and despite the uncertainty, Fox is planning to wait rather than try to sell his crop elsewhere.

“We’re going to stick with Mike,” Fox said. “Mike has done a good job with the farmers market in the past and he’s gotten us through some rough times.”

While tornadoes as strong as the one that hit Courtland are uncommon for this area, Fox is used to the adversity that comes with farming.

“Farmers needed the rainfall drastically … Most everybody in the area was in dire straits as far as rainfall goes.”