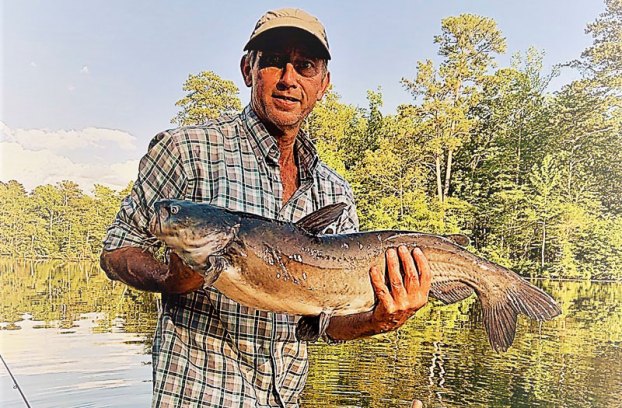 Shortly after boating this 12-pounder, a 5-pounder made the author, Allen Harper, pay for his transgressions. -- Submitted Mike Daniels

Confessions of an amateur sportsman

‘Stabbed by a Nottoway River Catfish’

I have always enjoyed the simplicity of catfishing. I suppose it started while growing up in the southside Virginia town of Brookneal, flanked to the north by the Falling River and to the south side by the Staunton River (otherwise called the Roanoke River except for the stretch from Leesville Dam to Kerr Reservoir). Both rivers are known for multiple fish species, but as a kid in the 1960s and ’70s, I soaked my share of baitworms and dead minnows in them while pursuing Channel Catfish.

Now most of my catfishing takes place on the Nottoway River near my home in Franklin, with Blue Catfish as the dominant species. I will let the fish and game biologists determine if Blue catfish are a good thing or bad thing for our rivers, but I must say they are fun to catch and make for a good fish fry. Blues in the Nottoway do not reach the size of monsters you read about caught in large lakes or the James and Appomattox rivers. But 8- to 15-pound fish are not uncommon, and 3 to 5-pound eaters are quite plentiful.

As a youngster I was taught how to safely handle catfish; and in all my time fishing for them, I had never been the victim of a sting from bony spines on the pectoral and dorsal fins. That all changed on a recent outing on the Nottoway. Perhaps sharing the story will help another angler avoid this very unpleasant experience.

Summertime temperatures will slow down the catfish bite. But if you fish deeper holes starting around 6 p.m. through to dusk or after, you can still pick up some action. My neighbor Mike and I had put the boat in at the route 258 ramp six miles south of Franklin. We ran upriver a couple of miles just above a wide bend, anchored the boat and starting fishing in 16 to 20 feet of water using slip sinker rigs with two rods apiece. By this time air temperature had moved to the low 80’s. With trees along the bank shading the setting sun, it was very comfortable for late June.

We had two types of bait out — large whole shiners from the Dail’s Home Center bait shop and my grocery store special of fresh chicken breast chunks marinated in cherry Kool-Aid mix. Based on past experience, coupled with a little dumb luck we picked a good initial spot. Within 30 minutes we had boated four good fish. The largest was a 12-pounder that was a joy to tussle with on a medium-light spinning rod. The plan was to put fish on a stringer to share with someone at the boat ramp and keep a couple for ourselves. Or so we thought.

After netting a 5-pounder for my fishing partner, I passed the stringer cord through its lower jaw and had the fish laying on its side in the bottom of the boat. As my left hand went down to grasp the stringer, the fish flopped up with perfect timing and force, driving its pectoral fin spine deep into my open palm. Then he flopped again with equal force and jerked the spine out. To describe the sensation as merely painful is a gross understatement. For the next 10 minutes my eyes watered, sweat poured off my forehead and I moaned like some sort of exotic animal pinned under a tree.

For obvious reasons, our outing was cut short. We released all fish from the stringer including the 5-pound perpetrator, got the boat on the trailer and hustled back to town. The pain had eased off some, but was still plenty intense. In my younger, more macho days I probably would have washed the hand well and called it a day. But now older, and hopefully wiser, I opted to go to the ER at Southampton Memorial and have my punctured palm looked at.

During the check-in process I tried to explain my problem.

“You mean to say you were bitten by catfish” the attendant asked.

“No mam, I was stabbed by a catfish.”

Once the strange nature of my injury was recorded, the hospital staff took fine care of things. The puncture was irrigated with a full 1-liter of bottle of sterile saline and I received injections to prevent tetanus and bacterial infections. Before bandaging my hand, they even took an x-ray to assure there were no foreign bodies left in the wound.

As of this writing my hand is healing well, and I am glad I took the time to seek out some medical treatment. The intensity of the experience got my curiosity going, so I did a little literature searching on the topic of catfish stings. I was surprised to find as much as I did in such scholarly publications as the Journal of Hand Surgery, Envenomation, and Wilderness and Environmental Medicine.

One case study I found indicated a guy had to get two fingers amputated after delaying treatment for a catfish stabbing — yikes! After struggling through some of the big words in various articles, here is my best attempt at an angler’s bullet list on catfish fin spine stings:

• Catfish fin spines are located on each pectoral (side) fin and on the dorsal (upper back) fin. When threatened. catfish “lock” these spines outward as a defense mechanism. Experience shows that fin spine tips are sharpest on smaller, younger fish, but should be respected on mid-size and larger fish too.

• A short internet search can provide instructions on how to safely grip a catfish. My only addition would be the reminder that you do not have to be holding a catfish to receive a nasty puncture. Any skin surface too close to a catfish flopping in a boat or on the bank can result in injury (as I learned the hard way).

• Fin spines are not just sharp at the tip, but also serrated along the shank with small “teeth” directed away from the end. This can cause the spine to lodge in the puncture and do extra tissue damage when pulled out. Some case studies in the literature indicated that the fin had to be cut free of the fish by the angler, then be removed at a medical facility.

• Glands along the shank of the spine contain a venomous toxin. When the membrane around these glands is ruptured, venom is released. This causes rapid pain, inflammation and swelling at the puncture site.

• Shallow punctures can be self-treated by thorough cleaning with soap and water, then disinfected followed by treatment with over-the-counter topical wound products. The major concern is with deeper punctures that go unattended. Some nasty microscopic critters can go in with the fish spine and be hard to clean out. In such cases there is potential for tetanus and other secondary bacterial infections to develop. An attending physician will ask when you had your last tetanus shot. If you are like me, you probably will not remember and he or she will give you one. Like me you will probably receive a broad-spectrum antibiotic injection as well.

So, there you have it, catfish stabbing 101. Hopefully, it gives some peace of mind when you go after those blue and channel catfish. My hand feels much better and I am already looking forward to my next evening on the Nottoway.

By Brenda Peters Master Naturalist In my first column, I shared how I had decided to make better use of... read more