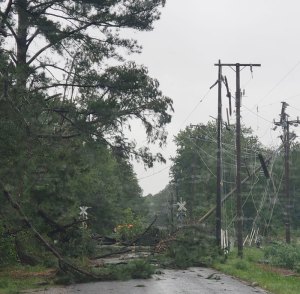 Tropical Storm Isaias made itself felt early Tuesday morning. These broken power lines and tree limbs were photographed by Jason Casper just behind his house at the train tracks on Flaggy Run Road in Southampton County. — Submitted Jason Casper

There is also a report of a tornado that struck in Courtland, which The Tidewater News is working to confirm.

Franklin has not been so severely affected by comparison.

Sgt. Scott Halverson, spokesman for the Franklin Police Department, told the paper, “The city fared pretty well last night, no major flooding, no major damage. We have limbs in the streets that public work crews are dealing with and several down power lines that the electric department is on scene handling as we speak. Several neighborhoods in the city as well as Isle of Wight are without power at this time.”

The paper will continue to update on the matter.

Board supports superintendent’s recommendation 5-2 COURTLAND When Southampton County Public Schools reopen on Sept. 8, the students’ learning will be... read more