He was preceded in death by his parents, Ruth and Marvin Ward of Exmore, Virginia.; and by his brothers, Marvin and Lee. 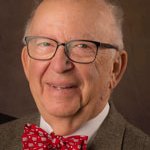 He was a graduate of the College of William & Mary and the Medical College of Virginia. Following his internship at Mercy Hospital in Springfield, Ohio, he joined the Navy, serving two years with the Marine Corps at Camp Lejeune. Upon discharge in 1961, he began the practice of family medicine in Franklin. In 1970 he began training in psychosomatic medicine and moved his practice to Richmond in 1973. During this time he also donated hundreds of hours to aid various police agencies, including the FBI and the CIA. In 1986, Dr. Ward became a mentor for the William & Mary men’s gymnastics team, teaching relaxation and imagery techniques. He did this for many years, only stopping due to poor health. He also served on the William & Mary Swem Library Board for 10 years. Later, he served on the Board of the Smithsonian Institute Libraries.

His love of old automobiles led to his passion for Rolls-Royce and Bentley motorcars. He owned several over the years and served in many offices in the Rolls-Royce Owners’ Club, becoming president in 2004.

In 1990, Dr. Ward closed his private practice. He undertook extensive training in infectious diseases and then worked in the health clinics of the Commonwealth of Virginia until he retired again in 1999. Beginning in the mid-1990s, Dr. Ward began what he described as some of his most rewarding years in medicine. He became a volunteer with Physicians for Peace, a group that does mission work all over the world. He felt it was his good fortune to visit 17 countries in 37 missions, including Kazakhstan, Libya, China and the Sudan. Saying of his earlier retirement “It just didn’t work,” once again he went back to work in 2001 as a consultant in the chest and tuberculosis clinic in Richmond until he was forced to retire in 2016 due to ill health.

The family would like to express our sincere appreciation to Dr. Brent Perkins and the wonderful nursing staff at Massey Cancer Center, Stony Point, for the warm loving care given to our Fred.

There will be a private family service, to be followed at a later date with a memorial service at All Saints Episcopal Church.

In lieu of flowers, donations may be made to All Saints Episcopal Church, the Richmond SPCA, or a charity of your choice.