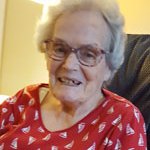 A native of Southampton County, she was a daughter of the late Charlie and Sweetie Lee Blythe.

The family would like to thank the caregivers of The Village at Woods Edge and East Pavilion and a special caregiver and friend, Debbie Munford, for the wonderful care.

A graveside service will be at 10 a.m. on Saturday, July 25, in Poplar Spring Cemetery with Pastor Randy Wright officiating.

The family suggests memorial donations be made to Hunterdale Volunteer Fire Dept. or Franklin Fire and Rescue.

COURTLAND — Constance Vick “Connie” Marks passed away on July 17, 2020. She was a native of Newsoms and predeceased... read more