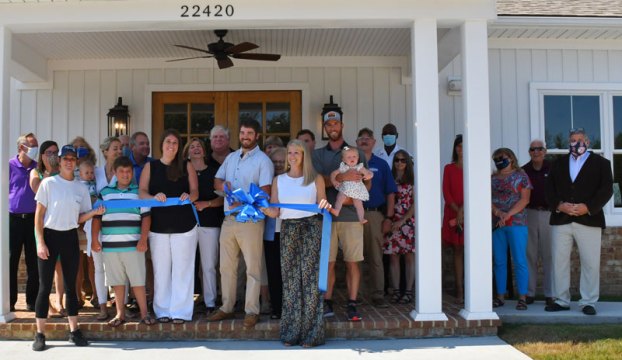 Robert Marks IV cuts the ribbon to dedicate Belmont Peanuts of Southampton's expanded facility. A retail shop and delicatessen are in the front. With him are sisters, Kelly M. Russell and Megan M. Harrell. Their parents, Patsy and Robert Marks, as well as other family, friends surround them. The ceremony took place on July 15. Mitzi Lusk | The Tidewater News 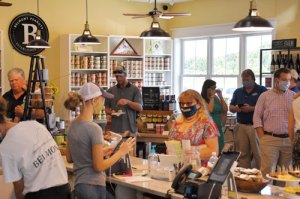 A wide variety of Belmont Peanut products is available for sale in the retail store. In the foreground, a customer place her lunch order at the delicatessen. Mitzi Lusk | The Tidewater News

The culmination of Belmont Peanuts of Southampton Inc.’s $2.5M expansion took place with the ceremonious cut of a ribbon on the morning of July 15. Of course there at the center was the Marks family, which owns and operates the company. That’s how and when they hosted the dedication and open house to highlight the occasion.

Meghan Councill, board president of the Franklin-Southampton Chamber of Commerce, addressed all present inside the aromatic store/delicatessen that fronts the new facility and warehouse on Southampton Parkway. Councill said she’s so excited about the opening, then called the Marks a wonderful example to the community, and added about the deli, “It’s a really great menu.”

In full agreement was William Hart Gillette, vice chairman of the Southampton County Board of Supervisors, who said it has “certainly elevated the lunch hour, not just for the county, but also visitors.” He also said that the work that’s gone into the company growth “is unimaginable for most of us.”

In late September 2018, Belmont Peanuts announced expansion plans on the lawn of Robert and Patsy Marks, who started their gourmet peanut business in 1993. With them were their children, Megan M. Harrell, Kelly M. Russell and Robert Marks IV, as well as director of operations, David Peck.

The production plant was built to increase production and improve efficiency in operations. The warehouse, which the Marks said is greatly needed, will be for the peanuts before and after processing.

Also stated then was that over the next three years, 10 new jobs and five full-time equivalent positions would be established. The upgrades are estimated at increasing the volume of purchased peanuts by 30 percent, and over $126,658 in new purchases.

The Governor’s Agriculture and Forestry Industries Development Fund then presented a $30,000 facility grant. Southampton County agreed to match this local money, making it the first AFID grant to the area.

Son Robert thanked all for attending the open house and supporting the family business. His mother later said that he and daughter Megan, along with Cassie Johnson, developed the deli menu. “It was a process. She pointed out London Harrell, who is the manager of the eatery.

In addition to selling the wide variety of Belmont peanut-based snacks, there are also wines and beers, such as IPAs.

The company name, incidentally, comes from the family home of the same name in Capron, which is on the state and national register of historic places.

Patsy concluded by saying that the family and company are “really grateful for the support of our community.”

Belmont Peanuts is specifically at 22420 Southampton Parkway (Route 58E between Capron and Courtland). The shop and deli are open from 8:30 a.m. to 4 p.m. Monday through Friday; 11 a.m. to 4 p.m. Saturday and Sunday. Visit www.belmontpeanuts.com for more details.

By Jay Brenchick CHESAPEAKE The Hampton Roads Chamber hosted the 2020 Small Business of the Year luncheon on July 16... read more