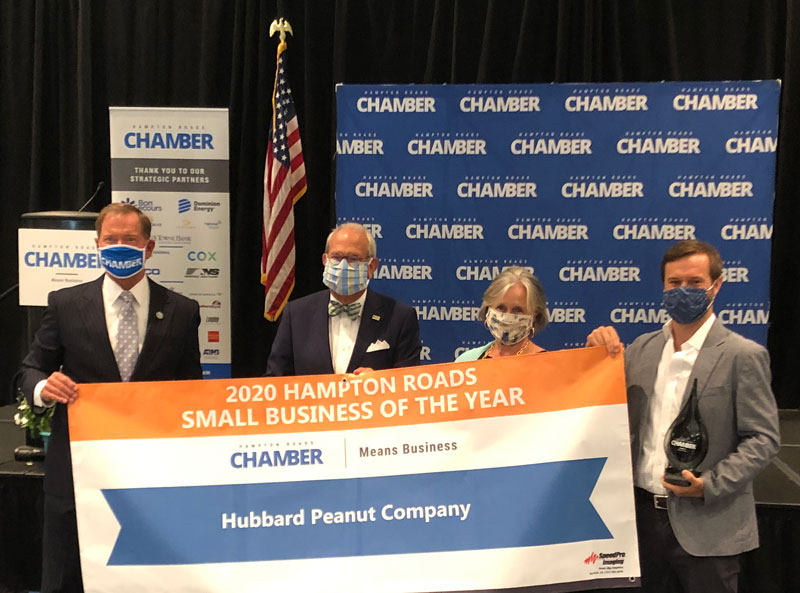 From left to right are Bryan Stephens, president and CEO of the Hampton Roads Chamber, Frank Rabil, Lynne Rabil and Marshall Rabil. -- Submitted

The Hampton Roads Chamber hosted the 2020 Small Business of the Year luncheon on July 16 in the Chesapeake Convention Center. Six businesses from Hampton Roads were honored during the event for their outstanding contribution to the regional small business community. Hubbard Peanut Company (Hubs) was awarded the Western Hampton Roads Small Business of the Year prior to the luncheon. During the award recognition, a video montage displayed the company’s family history, and gave viewers a sneak-peak into their new facility in the former Farm Fresh building off of Armory Drive in Franklin.

After all six businesses were recognized, the panel of judges announced the year’s overall winner, which was awarded to Hubs. Marshall Rabil accepted the award on behalf on the entire family and staff of the organization.

FSEDI would like to congratulate Hubs on this outstanding award and thank the organization for propelling economic efforts in the Franklin Southampton community.

JAY BRENCHICK is the president and CEO of Franklin Southampton Economic Development Inc. Contact him at 562-1958 or jbrenchick@franklinsouthamptonva.com.