She was a native of Newsoms and predeceased by her husbands, Robert L. Nicholson Jr. and Robert F. Marks Jr., and an uncle, Marshall T. Vick. 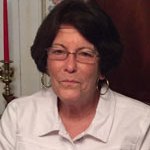 Connie was a member of Capron United Methodist Church, where she had previously played the piano and served on other committees. A person who enjoyed the outdoors and her flowers, she was a member of the Franklin Garden Club and the Country Acres Garden Club. Connie was also involved at Southampton Academy where she was a past member of the Board of Directors and served many years as the co-chairman of the Southampton Academy Antique Show. She always had fond memories of trips to the mountains.

A private graveside service will be held.