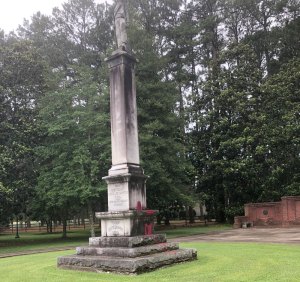 The monument to Confederate dead at the park between Clay Street and Meadow Lane in Franklin was vandalized by a person or persons unknown sometime in the evening of July 8 or early morning of the next day. The paint has already been cleaned via a power-washer. — Submitted Orrin P. Rockwell

The process outlined in state law for removing the city of Franklin’s Confederate monument from its current location in Memorial Park is moving forward. Franklin’s City Council voted 6-1 Monday evening in favor of relocating the statue. The dissenting vote came from newly elected Councilman Mark Kitchen.

A public hearing will be scheduled for Aug. 24. Despite having now received public comments on the matter two months in a row, state law requires a formal hearing be held, and advertised in a local newspaper no less than 30 days prior. Following this hearing, the Council must vote on any action to remove, relocate, cover or add signage contextualizing the monument.

“We must embrace a culture that America is embracing, that is social justice and social equality,” said Councilman Linwood Johnson, who made the motion.

Councilman Bobby Cutchins, who seconded Johnson’s motion, said his purpose in doing so was to “show we care enough to listen” and in hopes of avoiding the vandalism seen in other localities where protesters have taken matters into their own hands. The Franklin monument was, in fact, recently vandalized with spray paint.

“The shame would be to see the monument destroyed,” Cutchins said.

Earlier that evening, five people — four Black and one white — had spoken in support of removing the monument, and another three — all white — indicated they would prefer to see it remain where it is. Erected in 1911 by the Agnes Lee Chapter of the United Daughters of the Confederacy, the monument depicts a stone carving of the Confederate battle flag and bears the inscription “love makes memory eternal, to our Confederate dead.”

“I am here in support of the removal of the Confederate statue,” said Audrey Lee, who then spoke to the history of the battle flag depicted on the monument.

That flag, she said, which features 13 white stars atop a blue diagonal cross and red background, was never adopted by the Confederate Congress as its national flag nor flown over any state capitol during the five years the Confederacy existed. It was, however, incorporated into the design of the Confederacy’s circa-1863 national flag — which became known as the “Stainless Banner” for its use of the design in the upper left corner of an otherwise white flag. Savannah Morning News Editor William T. Thompson, who has been credited with designing the Stainless Banner, wrote the following in an April 1863 editorial, which Lee quoted:

“As a people, we are fighting to maintain the heaven-ordained supremacy of the white man over the inferior or colored races; a white flag would thus be emblematic of our cause.”

Politifact.com has rated Facebook posts attributing the above quote to the “designer of the Confederate flag” as half-true. Thompson did, in fact, write the above statement, Politifact concludes, but may not have been the first to suggest placing the familiar Confederate symbol atop a white flag. The battle flag itself was designed by Confederate politician William Porcher Miles.

Use of the battle flag, in a rectangular form rather than its original square shape, “began as a response, not in 1865, but to the Civil Rights movement of the 1950s and 1960s, and continues this day in support of white nationalism and white supremacy,” Lee said.

Peter Helms, however, asked the Council to consider the cost of relocating the monument, which he estimated to be between $50,000 to $75,000.

“I think that’s fiscal irresponsibility myself,” Helms said. “On the monument it clearly says one thing: love makes memory eternal … if anyone can find a message of hate in there, maybe you’re the problem.”

According to City Manager Amanda Jarratt, Franklin has received an estimate of $50,000 for removing and relocating the monument to Poplar Springs Cemetery, where, if the Council votes to proceed with the project following the public hearing in August, city staff will demolish the gazebo and construct a concrete pad large enough to accommodate the monument.

“Some may say, ‘Just get over it, it’s not 1865, we never owned slaves, we never lynched anybody,’” said Carla Sumblin. “I would say to them … we can no more change the ideology of the Confederacy than the stain of slavery, but we can make a decision in 2020 to move the government of the city of Franklin forward.”

“When all this started, I was a bit offended by all this taking down, all this kind of stuff, but since then … I’ve really made a big paradigm shift,” said Jim Councill. “Now at least I understand that there’s some pain in all that.”

However, instead of advocating for the monument’s removal, he suggested reworking its language to be a memorial to all veterans.

Jarratt recommended that August’s public hearing be held in Franklin High School to accommodate a larger crowd while maintaining social distancing in light of the ongoing COVID-19 pandemic.

[Editor’s note: This version includes text that was not included in the print edition, specifically concerning the history of the battle flag shown on the monument. It had been omitted only for reasons of page space, not because of the content itself.]

A previously published version of this story had stated four speakers, all Black, had spoken in favor of removing the monument, while another four, all white, had spoken in favor of leaving it where it is. C. Earl Blythe, who was among the citizens’ time speakers at the July 13 Franklin City Council meeting, referenced his recent Tidewater News column on Franklin’s Confederate monument – in which he argued that the monument honored free Blacks who fought for the Confederacy as much as it honored whites. Yet he did suggest moving the monument to Poplar Springs Cemetery, where some Confederate dead are buried.

COURTLAND On Monday evening, the Southampton County School Board along with approximately 50 other county residents heard the proposals for... read more