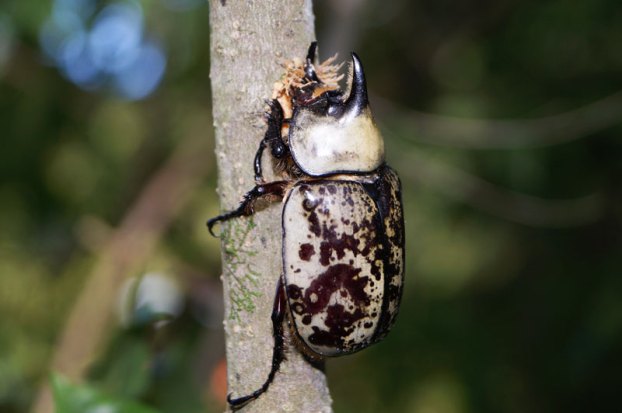 A male Eastern Hercules beetle peels the bark of an Ash tree. The smell of the sap, combined with the insect's odor, has been compared to the scent of blueberries. This is done to attract a female. Submitted | John Bunch

The Eastern Hercules beetle, also known as the Rhinoceros beetle (Dynastes tityus), is the largest beetle living in our area. They are quite impressive to see, especially the males sporting their rhinoceros-looking horns. The females don’t possess these, but do have basically the same green/gray coloration with black to brown markings, each beetle being unique in its coloration.

As is the case with so many other insects, the bulk of the Hercules beetle’s life is spent in the larval stage only to attain adulthood for primarily reproductive purposes. The larvae is a large grub, feeding in decaying wood for at least a year before metamorphosing into an adult. It’s in the heat of the summer around the end of June when the adults emerge and once they do, they set about finding a mate.

The male will seek out an Ash tree to set up his territory hoping to attract a female. He finds a suitable limb, approximately an inch in diameter, and begins peeling back the bark to expose the sap. The scent of that sap along with his strong odor, much like the scent of blueberries, will likely attract a receptive female if one happens to be in the area.

When the female arrives she begins feeding on the sap, taking over from the male by peeling back more of the bark. It is at this point when mating occurs. If another male shows up while the female is present, the original male will vigorously put up a defense towards this intruder. The entire mating span of time, from the arrival of the male to when all mating activities are completed, takes place over the course of about 3 weeks. There’s also the chance that numerous females will visit that same male while he’s there. Following mating, the female will fly off to find a spot to lay her eggs finding the appropriate place to ensure the survival of her young.

Unfortunately, the recently introduced invasive Emerald Ash Borer is spreading across our country killing the Ash trees. Since the Hercules Beetle uses these Ashes for reproductive purposes, we have to wonder if we, in turn, will lose these beetles if the Ashes disappear?

So if you have any Ash trees on your property and if on a hot night in the early part of July you notice the scent of blueberries in the air, you can be sure that Hercules beetles are present.

SURRY The Chippokes Plantation State Park, along with all other state parks, has reopened. According to information posted on www.dcr.virginia.gov,... read more