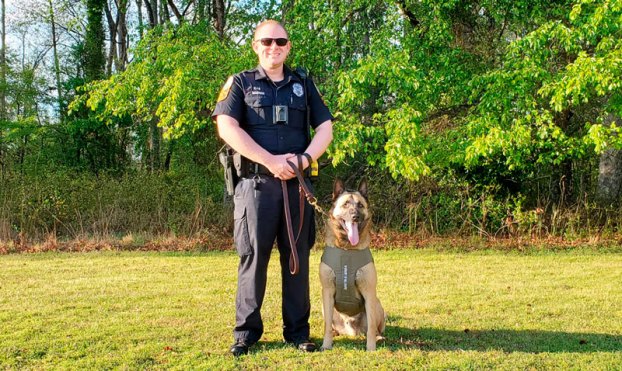 The Franklin Police Department has been diminished with the death of a valuable colleague.

On Monday, spokesman Sgt. Scott Halverson announced, “It is with sad hearts that the Franklin Police Department announces that K-9 Ares passed away on July 6, 2020. K-9 Ares gave the citizens of Franklin five years of superb service.

“Officer Russ Warren [handler] and K-9 Ares were instrumental in multiple narcotic interdiction efforts within the City of Franklin and throughout the Hampton Roads region. Memorial arrangements are being made and will be released when finalized.”

On Monday, officers and other persons gathered at Wright Funeral Home to salute Ares before he was taken in for funeral preparations.

This past February, the FPD announced that one of its K9s would receive a bullet-and-stab protective vest from the non-profit organization Vested Interest in K9s Inc. The equipment was sponsored by Beverly Draper of Mechanicsville, and embroidered with the words, “In memory of Bil Draper.”

Ares had the honor to be the first to wear the vest.

Four for the 4th