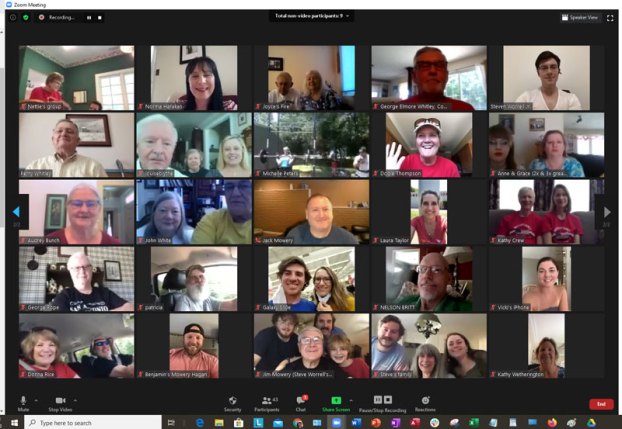 In spite of concerns that the COVID-19 pandemic would disrupt the gathering, there were 160-plus descendants of Elisha Everett Whitley who participated in the 156th annual family reunion through a Zoom meeting on July 4. Submitted | Steven Worrell 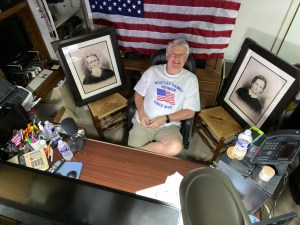 Steve Worrell of Greensboro, North Carolina, is flanked by portraits of his great-great-grandparents, Elisha Everette and Mary Eliza Barnes Whitley. Steve was able to arrange for fellow Whitley descendants to reunite electronically for the 156th family reunion on July 4. Submitted | Steven Worrell

Due to the COVID-19, the Whitley family was worried that its record of 156 consecutive family reunion was in jeopardy. However, due to the ingenuity of great-great-grandson, Steven Worrell — this year’s host — he created a system, primarily through Zoom, which allowed family members to connect at noon on July 4 from around the world, and allowed us to continue our record of 156 consecutive reunions on the 4th of July since 1865.

Elisha Whitley was married on Jan. 7,1855, to Mary Eliza Barnes, daughter of John Elias Barnes II and Talitha Buxton. They had nine children.

Whitley enlisted in Company G, 31st North Carolina Troops on Sept. 12, 1861, and was paroled on May 2, 1865, after the surrender of Gen. Joseph Johnston to Gen. William Sherman on April 26, 1865, at Bush Hill in Randolph County, North Carolina.

Tradition has it that when Whitley returned from the Civil War, his sisters gave him a birthday dinner on July 4, 1865, and he asked that this be continued.

Since that time, there has been an annual reunion carried on by his descendants.

A letter to my grieving self

By Charles Qualls Dear grieving self, there are a few things we need to get straight. So listen up. Some... read more