A native of Southampton County, he was a son of the late Richard Spier Edwards Sr. and Nannie Wilhoit Edwards. 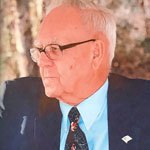 When asked how would you like to be remembered, Spier stated, “As one who helped Boykins become a better community in which to live and work.” He had a love for the town of Boykins that was shown through his dedication and hard work. Three words people used to describe him were aggressive, dedicated and trustworthy.

A graveside service will be held at 2 p.m. on Monday, July 6, in Beechwood Cemetery with the Rev. Scott Biggers officiating.

There will be a viewing from 9 a.m. to 5 p.m. on Sunday in Wright Funeral Home, Franklin, and the family suggests that in lieu of flowers, memorial donations be made to the Boykin’s Lion Club or Boykins Rescue Squad.