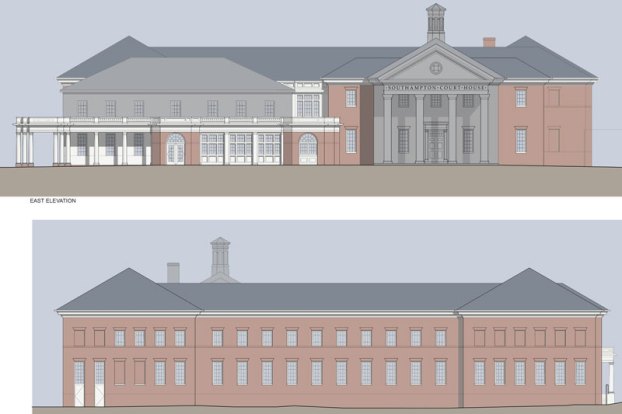 Shaded in gray on these front and back renderings are the 1834 and 1962 wings of the existing courthouse, which would be the only portions not demolished and rebuilt in Glavé & Holmes’ latest plan. -- Courtesy | Southampton County 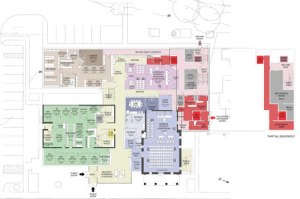 The judges who had objected to Glavé & Holmes’ initial plan for a renovation of the Southampton County Courthouse appeared to react more favorably to a revised concept the architectural firm presented via teleconference on Monday.
The initial $9.4-million plan had proposed reusing much of the courthouse’s current footprint, adding just 1,490 square feet to the existing building. The revised plan would provide a total of 40,000 square feet, including the basement, at an estimated cost of $15.9 million. County Administrator Mike Johnson clarified that this estimate, like the previous one, does not include furnishings or temporary facilities while the project is under construction.

The plans presented Monday still call for the county’s general district courtroom and circuit courtroom to remain located on the first and second floors of the building’s circa-1834 wing, but now include adjacent witness rooms, attorney conference rooms and a jury deliberation suite, complete with restrooms and a kitchenette as Chief Circuit Court Judge Carl Eason Jr. had requested last month. Both courtrooms will measure just over 2,000 square feet and be remodeled to accommodate jury trials.

The circa-1962 wing would also be expanded to accommodate the needs of the Commonwealth Attorney’s office. All other structures would be demolished and rebuilt, with new construction accounting for 27,250 of the 40,000 square feet.

“To put it bluntly, we went back to the drawing board,” said Glavé & Holmes Architect Andrew Moore.

The revised design also includes a gated parking area for judges, as well as separate corridors for defendants, staff and the public. Meeting attendees — which included judges, court staff and representatives from Southampton County’s Board of Supervisors and Franklin’s City Council — have until next week to deliver written comments on the plan to Johnson. Should the concept be approved, Glavé & Holmes anticipates completing the design phase of the project within the next six to nine months.

“We are optimistic we will be able to work this concept further into a full schematic design,” Moore said.

Once the design phase is complete, the project can move into a 14- to 16-month construction phase, with ground breaking possibly as early as March 2021.

COURTLAND On behalf of the Christopher D. Ray Memorial Foundation, and thanks to Tiffany’s Food Truck, lunch was provided on... read more