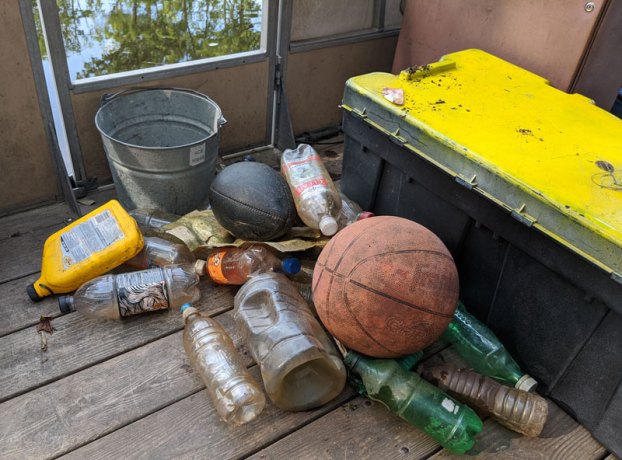 How a basketball, a football and other trash recently got into the Blackwater River remains a mystery to the RiverGuard. -- Submitted Jeff Turner

Reckless boating is a crime

Spirit of Moonpie and I spent the 26th through the 28th on the Blackwater below Franklin. The water was a little high, clear and fast. Air temps ranged from 68 to 90 degrees, it was a hot patrol for real.

Once again, the eagles’ nest at Cherry Grove has fell out of the tree. Thank goodness the juvenile eagles were already out of the nest and flying. I did not think the eagles were going to build back in that same pine tree because a main support limb was lost this past year when the old nest went on the ground. So, it will be interesting to see if they put a third nest in the exact same spot. I saw one of the juveniles late in the day on the second day of my patrol being harassed by an osprey. They were not like going hand- to-hand, but they were doing a lot of hollerin’ back and forth and it didn’t sound like pleasantries.

The fishing on this trip was pretty good. I didn’t catch any monster catfish, which is what I’m after at night out there, but I did catch a few small ones that at least kept me awake both nights. The biggest weighed only 7 pounds. Bream fishing was amazingly slow on the flyrod, don’t know why, ’cause the river was beautiful. I also caught a few small bass casting.

The RiverGuard caught this 7-pound catfish during his most recent expedition on the Blackwater River. — Submitted Jeff Turner

One was particularly satisfying as I caught it on a 70-year-old Hawaiian Wiggler that was my Grandaddy Preacher Wright’s lure. I took it out of my antique lure collection and shined it up and re-dressed it just as a fun thing to do. I figured he would think that was pretty neat to catch a fish on his lure. He used these a lot and for many many years. People didn’t get a scratch on a lure and just throw them away 70 years ago. You did what you had to do to keep a lure in service. This one, as with the other three I have of his, are missing a big chunk of metal on one wing, the weed guard is one fashioned by him, and of course it looks like it’s been painted at least three times. Still, it caught a bass with its unique wiggle all these years later!

I thought the trash on this trip was going to be bad because of the storm that hit Franklin the day before I went. However, when I got out there, I was stunned there was not that much up on the Franklin end of the river. It was not until the second day when I got way downriver that I found the trash. Evidently the storm ditches in Franklin have been cleaned pretty well by the successive storms we have been having and this last storm had just run the trash on down the river. I picked up my usual fair share of basketballs/footbals, and of course the household trash that I don’t understand how gets in those ditches. I also picked up the usual dozens of plastic water bottles and heavy 48-ounce glass beer bottles.

Speaking of picking up trash, most of you know I have been doing that on the rivers for over 20 years. That’s a lot of effort I put out to help keep our rivers not only clean, but also safe. So, I was stunned Saturday at 5 p.m. when I was tied up in a large tree top at the eagles’ nest to get a large amount of trash up when this huge boat came by me and smashed me all up into the tree. I was 25 feet out from shore and on a straight piece of river in the pontoon boat, so I was certainly plenty visible. The river is only 100 feet wide at that location and this huge boat throwing a huge wake traveling at about 20 mph passed by me at less than 40 feet. Now 40 feet might sound like a lot of space, but it is not especially since I was broadside to them. I was stunned someone would do that in this age were everyone is supposed to have taken a boater’s education course by now.

I’m pretty sure this was a deliberate attack as after they smashed me, they looked back and appeared to be amused by what their wake had done to me. It was very violent, I thought my canopy was going to snap off. Limbs were breaking and falling in the boat, chairs turning over rods flung from their overhead racks. I waited two hours for them to come back upriver so I could get their boat registration and was successful at that and have already turned the information over to the proper law enforcement. Va code 29.1-738.03 states A person shall be guilty of reckless operation of a motorboat or vessel who operates any personal watercraft recklessly or at a speed or in such a manner so as to endanger the life, limb or property of any person.

The thing that really hurts me though is that someone would disrespect me after all I do to try to keep people like this young man safe out there and try to make the river a more pleasant experience. All those logs I tow to shore so boats won’t wreck on them, all that trash I remove, all that water testing, etc. and etc. must mean nothing to this guy. That is indeed sad there are people like this on our two rivers we call the Blackwater and Nottoway.

By Kristi Hendricks I am currently visiting with my aunt who has been an avid gardener for my entire life.... read more