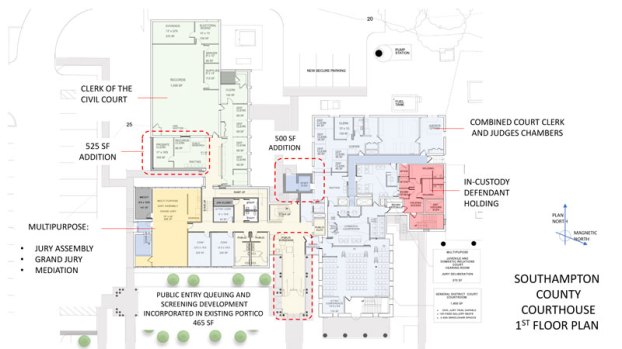 Glavé & Holmes, which in February officially replaced Moseley Architects as Southampton County’s firm of choice for the renovation of its courthouse, presented four judges with a conceptual plan for the project via teleconference on May 28.

However, about 10 minutes into architect Tom Potts’ presentation, the judges had already noted a number of design choices they found unacceptable. Potts is with Silling Architects, which has partnered with Glavé & Holmes on this project.

The blueprints had proposed renovating the existing courthouse structure while maintaining a majority of the building’s current footprint rather than building a large addition as previous architects had proposed. In this design, the building’s two courtrooms would remain at their current location on the first and second floors of the circa-1834 wing, but both be remodeled to accommodate jury trials. A third courtroom, measuring only 370 square feet, would be added to serve dual purposes as a location for juvenile & domestic relations cases and as a jury deliberation room.

This design would add just 1,490 square feet to the existing building for an estimated price of $9.4 million for the entire renovation. County Administrator Mike Johnson clarified that this cost estimate was for construction only and did not include other project costs such as design fees, temporary facilities or furnishings. The city of Franklin will be responsible for reimbursing Southampton County for roughly 22 percent of the total project cost, since the city will share roughly 70 percent of the renovated facility.

Eason also expressed reservations with maintaining the courthouse’s existing footprint, writing in a June 8 email to Juvenile & Domestic Relations Court Judge Stan Clark, “I absolutely agree that the County, and its architects, cannot create a viable plan if they are restricted to the existing courthouse’s footprint. Moseley [Architects] knew that, but the County’s BOS [Board of Supervisors] did not want to accept such.”

The Tidewater News obtained copies of both emails by virtue of County Administrator Mike Johnson having been copied on some of the messages. Johnson, when asked if the county had specifically told Glavé & Holmes to work within the courthouse’s existing footprint, said a stakeholders committee comprised of elected officials from the Board of Supervisors and Franklin’s City Council had asked Glavé & Holmes’ design team to meet the Supreme Court of Virginia’s courthouse guidelines while minimizing additions to the building’s footprint.

City Manager Amanda Jarratt, who had been one of the city of Franklin’s representatives to sit in on the teleconference, recalled that the judges had also taken issue with the pathway to the clerk of courts’ office and the size of the waiting room for the J&DR courtroom.

“It was loud and clear they wanted a new courthouse,” said City Councilman Bobby Cutchins, another Franklin representative to attend the teleconference.

“As in any first viewing of a conceptual design, there were things that needed to be tweaked and changed,” said Southampton County Supervisor Christopher Cornwell Sr., who had been one of the county’s representatives to sit in on the teleconference. “We are hopeful moving forward and confident that every effort is being made to not only accommodate the needs of all the end users, but additionally produce a fiscally responsible alternative that will be satisfactory to the 26,000 Southampton County and Franklin City residents burdened with paying for it.”

Moseley, the firm Eason had referenced, had been the county’s architect of choice from the latter half of 2016 through 2019, but not the first firm to work on the courthouse project. The first was PMA Architecture, which in 2008 had begun working with the county on proposed security upgrades to the courthouse. Circuit Court judges had asked the county to put these plans on hold in 2015, citing the need for additional work. In early 2016, PMA completed a space needs analysis for the county that had recommended that if renovation was preferred over new construction, the existing 23,000-square-foot courthouse be expanded to 38,000 square feet for a cost of approximately $16.5 million. Moseley, after reviewing PMA’s work, had recommended that the county build a new 44,000-square-foot courthouse at a cost of $26.5 million or renovate the existing building for $26.3 million.

The 44,000-square-foot courthouse had been intended to absorb the city of Franklin’s lower courts, which are currently housed in a building adjoining the city’s police station on Pretlow Street. The county cut ties with Moseley and re-bid the project when Franklin’s City Council backed out of plans to merge its courts with Southampton’s last year, and Jarratt had subsequently discovered that a state law from the 1970s requires each independent city, save for two exceptions, to have its own general district and juvenile and domestic relations courts. Both the city and county selected Glavé & Holmes earlier this year.

“I have been going around and around with the County on this for going on 12 years now, and there has been almost no progress,” Eason wrote.

Last July, he wrote a letter to Johnson giving the county and city a 12-month deadline to show “actual and meaningful physical renovations, which, at a minimum, meet the standards established by the Supreme Court of Virginia,” or construction of “a new courthouse on contiguous property, if the County so chooses.”

“But for the pandemic issues, I would support moving all court sessions beginning August,” Eason wrote to Clark. “However, the pandemic has created, at least for the Circuit Court, a whole new litany of issues and need to be resolved first.”

Glavé & Holmes plans to present a revised version of the conceptual plan to the Franklin and Southampton representatives and judges on Monday, June 29.

Nottoway honors Christie Claud as its Teacher of the Year