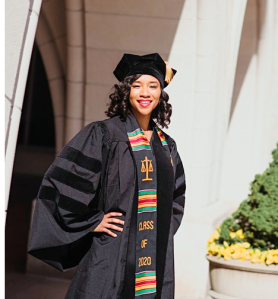 Malikah Iman Williams is the granddaughter of Mrs. Beverly Blue and great-granddaughter of the late Mr. Roosevelt and Mrs. Sallie Jenkins of Capron. She is also the daughter of Tony and Monte Williams of Prince George. A 2012 graduate of Prince George High School, Williams went on to graduate in 2016 from Brown University. Most recently, she earned her Juris Doctorate degree from Harvard Law School on May 28, 2020.

“Today I officially graduated from @harvardlaw! I have wanted this moment for so long and I can’t believe that it is finally here. ⠀⠀⠀⠀⠀⠀⠀⠀⠀⠀⠀⠀

“It is difficult to describe what exactly this moment means to me. As a Black American slave descendant, this degree is heavy. My mom grew up in a town where the current population is 167 people. In the same county where both Dred Scott and Nat Turner are from. The same Dred Scott from Dred Scott v. Sanford where the Supreme Court declared that Black people were not citizens of this country. The same Nat Turner who led a rebellion in Virginia. That is my history and today I count myself a graduate of an institution that was funded by the profits gained from unpaid slave labor. Heavy is an understatement. ⠀⠀⠀⠀⠀⠀⠀⠀⠀⠀⠀⠀

“I don’t know if I was my ancestors’ wildest dream. But, I do know that I wouldn’t be here today without their prayers, guidance, and strength. While I am unsure of what the future holds, I know my purpose: to make this cruel world just a little better for Black people. This is only the beginning.”

NEWSOMS Despite COVID-19 shutting down the schools, the GFWC Tarrara Woman’s Club and Boykins Lions Club continued their collaboration to... read more