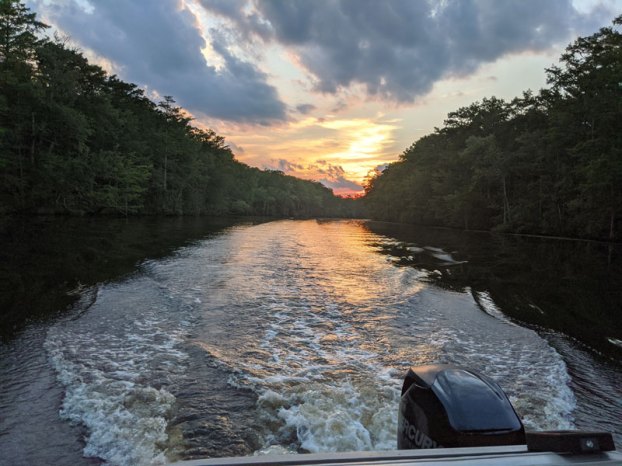 The RiverGuard photographed this recent sunset on the Nottoway River. Submitted | Jeff Turner 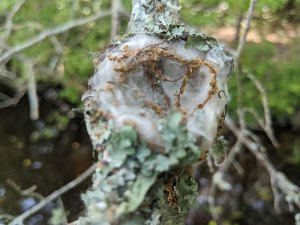 The RiverGuard discovered a hummingbird made this nest, about half the size of a golfball, on the roof of his pontoon, the USS Enterprise. Submitted | Jeff Turner

Spirit of Moonpie and I spent the 8th through the 10th on the Nottoway below Delaware. The water was cloudy, fast (the second day) and rising. I did not get water temps. Trash was pretty bad for this part of the river. Rarely do I have too much of a problem on the lower river, but this time there was more than usual. Granted most was old trash, but there was some litter that went into the river the day before I was out there. Speaking of trash issues, I want to thank the Beltrami family for helping me with a trash issue along the river near Checkerboard Corner. Very nice of them to have cleaned that problem up for me.

The fishing on this trip was pretty good. I ended up catching right many bass on this new topwater lure called a Whopper Plopper. The fish seemed to like it moving instead of the stop-and-go method. Half of the bass I caught were behind the lily pads in really shallow water. That was right much fun even though all six or seven of the bass were less than 2 pounds. I also had no problem catching bream either. They were tearing up a little deep diver lure

I fished for BIG catfish both nights using the jug on the rod technique. I was skunked the first night, but caught an 8 pounder and a 3 pounder the second night. Not what I was looking for, but the 8 was a little bit of excitement anyway. The jug on the rod is simply a gallon jug with a light stick in it which is attached to my line on a heavy rod and reel. I use a 6-foot drop line off the jug with 2 ounces of weight.

To deploy the rig, the water has to be moving so it will take the jug away from the boat about 50 feet. Then I wait and watch. It’s like fishing a giant cane pole. It’s really fun to watch the jug when a hit occurs. The great thing is if your line breaks, you can still get the fish, you just have to go chase the jug down! Cut bream is the bait of choice.

I had a cool and unusual experience on this trip that I had not witnessed before. Whilst pulled up under the trees to get out of the heat on day 2, I kept hearing the unmistakable buzz of a humming bird. Usually out there they come up to the boat and check out my two overhead LED lights on the roof of the boat thinking they are flowers. They check it out and leave. But for this experience I kept hearing that buzzing a lot. I finally got eyes on the tiny emerald jet and noticed there was something in its beak. It was like this every time I would see it. FINALLY, I saw it hover over what looked like a knot on the tree limb above me and it placed some white fuzzy stuff in that knot and promptly sped off again. That knot turned out to be a nest it was building. The tiniest little nest I ever did see, about the size of a half of a golf ball. So that was a pretty cool first for me on the river.

So yes, the USS Enterprise, that is what I named the pontoon boat waay back in 1984 when I bought it from a then new catalog company called Pro Bass Shops in Missouri. It cost me $1,500 in 1984 to have them bring it to me here in Virginia. Total price was $12,654 with a 115 Hp Mercury outboard on it. Pretty pricey back then. In today’s money that comes to $31,226. I was and still am a fan of the old Star Trek shows and so the boat was named after ole NCC-1701. I put the name on the boat with some stick-on vinyl lettering, and believe it or not, that original lettering is in good shape and still on the boat. It is about the only thing left that is still original from 36 years ago. Hhaaahaa. It has certainly been a good vessel to me over the years and I’m blessed it still carries me on my cosmic voyages on the two rivers we call the Nottoway and Blackwater.

Spirit of Moonpie and I spent the 31st through the 2nd on the Blackwater above Burdette. The water was rather... read more