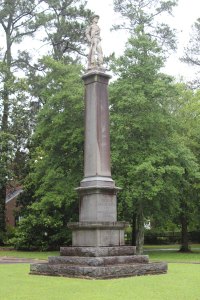 The city of Franklin has yet to schedule a public hearing on whether to remove the Confederate monument located in the center of Memorial Park, but is already receiving commentary on the matter.

Starting July 1, Virginia localities will be allowed to remove any Confederate monuments they own, per legislation the General Assembly passed earlier this year. Relocating monuments, covering them or adding signage that contextualizes the statues is also permitted.

“The intent may have been to honor the Confederate souls lost in the Civil War, a reminder of the purpose for which it was fought, or to erect a symbol that the ideology of the Confederate would live forever,” said Carla Sumblin of South High Street during citizens’ time at a meeting of Franklin’s City Council last Monday. “Whatever the intent, it has clearly become a symbol of divisiveness, hatred and racism for many people. Moving this statue from a public park, maintained by taxpayer funding, does not affect those who wish to honor the Confederate dead or remove the love and eternal memory of loved ones. We have national holidays and memorial cemeteries, where we honor heroes from all wars and our loved ones, for this purpose.”

She then told the City Council members the story of a young black girl in the sixth grade enrolled in Franklin City Public Schools during the 1970s, who tried out for the school band at a time when band members were mostly white.

“She was very happy to be accepted and was successful in mastering the flute, however, her excitement changed to fear and anxiety during summer band camp and at the finale concert in Franklin Memorial Park,” Sumblin said. “You see, even that young girl knew the unspoken yet visible boundaries of the racial lines that divided our city. Black people were not welcomed at the Bronco Club or Franklin Memorial Park without this exception of playing in the band. She felt conflicted, as if to dishonor her black heritage and people by being there.”

“Today, this young girl is a successful 53-year-old woman, married for 31 years,” she continued. “Yet when her grandchildren visit the park and every time she is there, those same feelings emerge from that symbol. Yes, that young girl is me.”

“UDC” is in reference to the United Daughters of the Confederacy, a group of women descended from Confederate veterans who financed the erection of numerous Confederate monuments throughout the early to mid 20th century, not just in the American South but also throughout the United States and even one in Canada honoring Confederate President Jefferson Davis’s visit to Montreal. According to CBC, Canada’s national public radio station, the Jefferson Davis memorial was removed in 2017 following the violence seen during the “Unite the Right” rally that year in Charlottesville, Virginia.

Sumblin was the only citizens’ time speaker that evening to advocate for the monument’s removal, having submitted her remarks in written form to comply with COVID-19 restrictions on public gatherings. Six others, also via written statements, had advocated against moving the monument, including Ken Parsons, who argued that doing so would cost the city several thousand dollars, and Forrest Wolfe, who argued that people, not monuments, create racism.

“I grew up in Franklin and there has never been any controversy over the current location of the monument,” said Billie Earnest, who now lives in Virginia Beach. “Why move it now? Just because the revised law says you can? Has anyone complained?”

City Manager Amanda Jarratt informed the Council members that over the past few weeks, the city has indeed received several requests to relocate the monument.

“I think those requests will continue to increase,” Jarratt said.

Before it can make any decision as to whether the monument stays or goes, the city must hold a public hearing no less than 30 days after advertising said hearing in the local newspaper. The new state law allowing removal of Confederate monuments also allows localities to petition the court for a voter referendum on the matter.

While the referendum is optional, Jarratt explained, the public hearing is mandatory. She added that some localities have received legal advice to delay even advertising such a hearing until after the law takes effect on July 1. As such, the City Council voted unanimously that evening to table the matter until its first meeting in July.