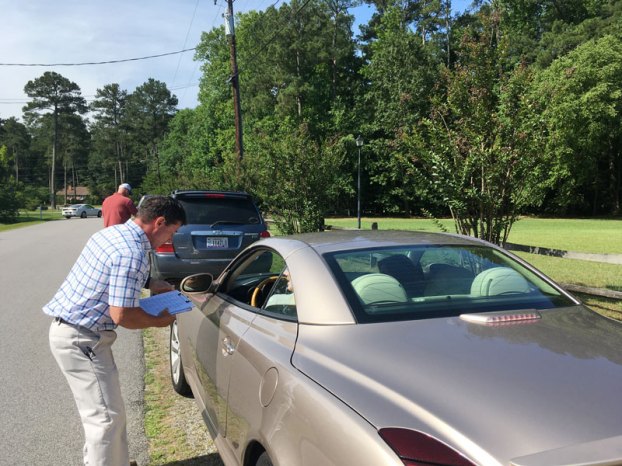 Chris Cornwell Sr. speaks to people about a petition calling for the recall of Sen. L. Louise Lucas as representative of the 18th District. He and other Southampton County residents were at Shands Park in Courtland on Saturday collecting signatures. Stephen H. Cowles | The Tidewater News 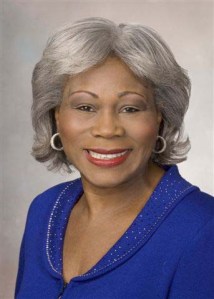 Hundreds of people this past weekend in Western Tidewater signed a petition demanding Sen. L. Louise Lucas (D-18) be recalled from the Virginia General Assembly. Both the organizers of the petition and those who put their signatures on it believe Lucas has misused her authority.

The specific incident that’s inspired this move stems from June 10 in downtown Portsmouth when she joined protestors wanting a Confederate monument taken down. Her presence was recorded live at the time and posted on social media.

In the fact sheet that was provided to potential signers, among the claims are that Lucas told the Portsmouth Police to not arrest any protestors, and that she knew protestors intended to vandalize or destroy the statuary. Further, “Senator Lucas knew, that when she entered the area, her actions would escalate the aggression of the protestors.”

During the demonstration, a man was severely injured by a part of the monument that fell.

In reaction to what was seen and reported, several residents in Southampton County and Isle of Wight County, which are included in Lucas’s district, decided to create the petition. Among those in Southampton angry with the senator are Chris Cornwell Sr. and Tommy Potter. Through social media such as Facebook, word got around that they were collecting signatures. Cornwell said Tim Anderson, an attorney of Virginia Beach, is the main organizer of the movement to recall Lucas.

After explaining what happened and outlining some of the reasons, such as those stated above, Cornwell told The Tidewater News, “She did wrong.”

In a statement emailed later to the newspaper, Potter wrote, “Sen. Lucas failed the citizens in her district by inciting a riot and using her position to hamper law enforcement. Our representatives are expected to uphold the law and be a mediator in times of crisis not fan This recall effort isn’t about statues and their status in today’s society. That’s for our elected officials to determine in the proper venues. This recall effort is about our elected leaders being just that: leaders.”

On Saturday at Shands Park in Courtland, they and two other volunteers were busy from around 8:30 to 10 a.m. speaking to people and getting names on the petition. Another effort was underway at the Isle of Wight County Courthouse, where a reported 100-plus signatures were collected.

“Get that lady out of office,” said Michael Wolfe, who signed on Saturday. “She not representing people correctly.”

Beth Kefler said, “Things have gotten out of hand. It [the demonstration] became violent very quickly. It was handled incorrectly. Sen. Lucas certainly helped to incite what transpired. That’s not what our leaders are there for.”

Another woman driving by told Cornwell, “Thank you for doing this.”

He told the paper on Tuesday that they collected approximately 350 signatures in that hour and a half time block.

“Another drive was conducted at the Ivor ball field on Sunday, collecting an approximate additional 50 signatures with people traveling from all ends of our county, Isle of Wight, and quite a few from Suffolk,” he said. “Additional drives are in the works … Though they are still filtering in from all over the 18th, it is believed that to date several thousand signatures have already been obtained towards the recall effort. Many thanks to all of those that came out to support this noble effort.”

The petitioners need 4,600-4,700 signatures before the matter can go to judicial authorities.

Anderson confirmed his involvement, though stressed he’s not the commander of the movement. The hope is to get more than just the minimum number of signatures, and to really make a statement.

Lucas’ reaction has been reported in other media, stating that the accusations being made have no merit, and that she’ll get through the ordeal.

Lucas’ reaction has been reported in other media, stating that the accusations being made have no merit, and that she’ll get through the ordeal. On her Facebook page, she wrote on June 14: “FaceBook Family and Friends. This post is in response to Susan Jones who posted on my political page. Susan, you are entitled to your opinion, and I am sure that you are not likely to change your mind about me, no matter what I say or do. Such is the world that we live in and has been my lifelong experience. I care more than you can ever imagine about the home of my birth, and I proudly represent every person in my district whether they voted for me or not or whether they accept me or not! The truth of the matter is, before I was called to the scene of the confederate monument; I spoke to the city manager and told her that constituents were concerned about the false arrest of the NAACP President and Vice President for peaceful protest early in the day. It was at that point that I was told (BY THE CITY MANAGER) that there would be no more arrests of peaceful protesters. When Chief Green arrived on the scene, I asked her to call her boss for confirmation. Now, let me make this abundantly clear, I do not condone destruction of public or private property and, if you believe otherwise, you don’t know anything about me as a human being or elected official. It is important to the community that Chief Green tell the truth about who gave her the order to STAND DOWN.

“My words are public and are on the videos circulating. I welcome an independent investigation where one is sworn under oath to tell the truth and nothing but the truth. I have done so and have nothing to hide. I would ask that the City Manager and the Police Chief do the same. There are witnesses to my conversations.”