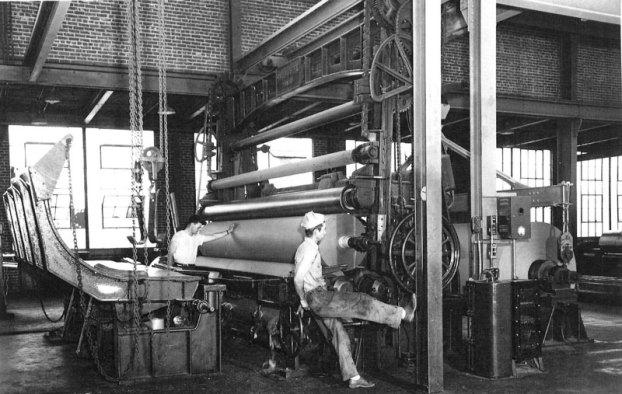 Employees at work at the No. 1 paper machine. -- Courtesy Camp Foundation

Looking Back: Camps go to papermaking 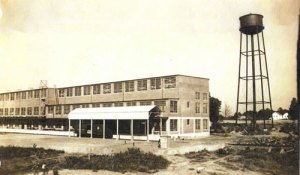 The exterior of the factory housing the No. 1 paper machine in 1937. — Courtesy Camp Foundation

In 1887, Camp brothers Paul D., James L. Sr. and Robert J. formed Camp Manufacturing Co. following their purchase of the R.J. and William Neely lumber mill, a pre-existing sawmill on the banks of the Blackwater River — across from Franklin. In the mid-1930s, Camp Manufacturing Co., led by President James L. Camp, Jr., were considering expansion into papermaking.

Pulpwood from woodlands and wastes, such as slabs, from saw timber would provide abundant raw material.

Two successful Virginia firms were already manufacturing kraft paper products. Albemarle Paper Co, in Richmond, and Chesapeake Corp. of Virginia, at West Point (Virginia), were being considered for some type of affiliation with Camp Manufacturing Co. The Camps were friends with Chesapeake’s president, Elis Olsson — a native of Sweden, and well-versed in paper-making.

Hugh Douglas Camp, youngest son of James L. Camp Sr., was interested in the idea of papermaking in Franklin. However, he was not an employee of Camp Manufacturing Co., although he was a major stockholder. Hugh was vice president and general manager of Roanoke Mills, a textile manufacturer, located in Roanoke Rapids, North Carolina.

By 1936, Camp Manufacturing Company’s directors, after quite a lot of discussion, decided to take initial steps toward paper manufacturing. At a meeting on Nov. 2 of that year, President James L. Camp Jr. put forth his plans for a Camp paper mill. Present was brother Hugh. James Camp’s proposal was that the Camps join with Albemarle and Chesapeake to build and operate a jointly owned paper mill at Franklin.

The estimated cost for the paper mill was $3,450,000. Camp Manufacturing Co. was to invest 50 percent, Chesapeake 3- ½ percent, and Albemarle 12-½ percent. By using the know-how of Albemarle and Chesapeake, the Camps would ease securely into a complex new field.

Representatives of the three firms met on Dec. 15, 1936, at Franklin, to form the new company. The company was named Chesapeake-Camp Corp. It was to be independent of Camp Manufacturing Co.

James L. Camp Jr. was to be president, with Hugh as vice president and general manager, and their cousin, John Madison Camp Sr., son of Paul D. Camp, as secretary-treasurer. Elis Olsson, president of Chesapeake Corporation of Virginia, and Henry Ellerson, president of Albemarle Paper Co., were chosen to be vice presidents of Chesapeake-Camp Corp. Directors included W.C. Gouldman and Julien H. Hill of the Chesapeake Corporation of Virginia Board of Directors; two men (unidentified) from the Albemarle Paper Co. Board of Directors; and James L. Camp Jr., Hugh D. Camp, Paul Ryland Camp, and John M. Camp of the Camp Manufacturing Co. Board of Directors. 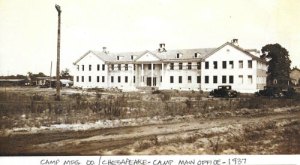 The Franklin paper mill, with 255 employees, became operational in 1937, producing brown kraft paper. Karl Thorsen, who came down from the Chesapeake Corp. mill, was named superintendent.

The tall and imposing Camp paper mill, with its constant halo of steam, dominated Franklin’s landscape and proclaimed the town’s number one industry. The Camp family was now, successfully, in the paper manufacturing business.

In 1937, to house the two companies’ staffs, a very imposing and massive colonial-style office complex was built adjoining the mill. The building was paneled in fine woods some of which were derived from Camp’s Dismal Swamp holdings. Hugh Camp dubbed it the “Chrysler Building.”

NOTE: The foregoing details the existence of Chesapeake-Camp Corp. Later history of the company follows:

On Sunday, May 29, 1956, Camp Manufacturing Co. supervisors were unexpectedly summoned to the mill. They were told that next-day’s newspapers would reveal that the company was negotiating a merger with Union Bag and Paper Co. of New York. However, the next day, an Associated Press dispatch revealed that the directors of both companies had already approved the merger — and that the firm would be headquartered in New York and named Union Bag-Camp Paper Corp. The people of Franklin were in shock.

In April of 1999, Union Camp Corp. and International Paper merged. In April 2010, the Franklin Mill was closed.

In May of 2011, in an unprecedented move, International Paper announced that they would repurpose a portion of the mill. In 2012, No. 4 paper machine was reactivated to produce “fluff pulp”, an absorbent material used in diapers, baby wipes and feminine hygiene products — an $83 million investment, creating 200 jobs. As of June 2020, employment stands at 312.

In the latter part of 2013, Franklin Lumber LLC, a company created by former International Paper employees, reopened the lumber mill.

Ivor to celebrate Fourth of July

Merle Monahan/Contributing Writer merlemonah@aol.com Ivor This year the Town of Ivor plans to again celebrate the Fourth of July, despite... read more