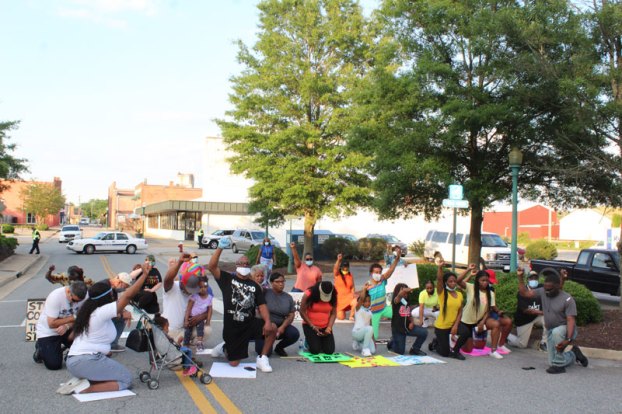 Following a peaceful march from the steps at Franklin City Hall to the post office and back, the participants in the Monday evening demonstration knelt for 8 minutes and 46 seconds. This was done in remembrance of George Floyd. who had been kneeled on by a police officer in Minneapolis on June 1. -- Stephen H. Cowles Tidewater News

‘We are the change’ 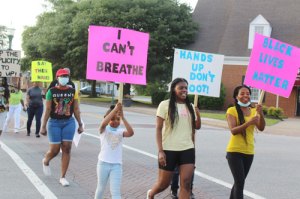 In front at center and right, Rickaya Sykes and Joslyn Perry led the demonstrators through downtown on Monday. — Stephen H. Cowles The Tidewater News

Demonstrators continue their cause at city hall

For the third day in a row, area residents called aloud for people to remember George Floyd, to decry police brutality and racism, and to demand equality for all Americans. This demonstration, taking place a week after the first in Franklin, occurred early Monday evening at the entrance to the city hall.

Before the procession began, a few participants spoke to the 33 or so gathered.

“We’ve got to be security for ourselves,” said Robert “Rev” Runner. “We can’t live in fear. Every step we’ll take will be for the rest of our lives.”

Another person, not identifiable, said the marching is “not an exclusion, but an inclusion.” 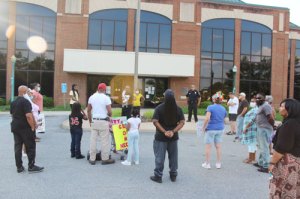 Robert Runner, at center, addresses those gathered at Franklin City Hall before they marched through downtown on Monday evening. — Stephen H. Cowles The Tidewater News

Jesse Evans of Franklin, who has joined earlier protests, said, “Let’s the community know we’re not just sitting down on this. Now is the time to act. Keeping it peaceful can work. Rioting and looting changes nothing, it only brings more havoc. We can do something without creating more chaos.”

The group then moved to Main Street and down toward the post office.

As in Saturday and Sunday’s events, young adults were among the vanguard. Joslyn Perry and Rickaya Sykes, who organized the event through Facebook, led in calling out now-familiar slogans such as “Black lives matter!” and “I can’t breathe. Get off my neck!”

On return to city hall, all who were able kneeled for 8 minutes and 46 seconds, which is the amount of time that a Minneapolis police officer reportedly knelt on Floyd during an arrest on May 25. Among Floyd’s last words were, “I can’t breathe!” The video recording of his treatment and news of his subsequent death led to violence in many large cities across the country.

All protests in Western Tidewater have been peaceful ones, and Monday’s was no exception.

Runner urged everyone to hold on and keep kneeling.

Afterward, Kenny Bergin of Franklin said he came to his event — as he did on June 1 — because, “I’ve got to show my support. If we’re not, how are we to get everything right?”

He added that understanding the black community’s concerns is important.

Sykes said she’s hopeful for change and grateful to all supporters,” and added another event will take place at 1 p.m. on Saturday, June 13, at Armory Field.

Perry said about the event’s purpose, “The change starts with us. We encourage young and old to vote in the presidential and local elections. I demand change.”

Pointing to her child in a stroller, Perry added that she wants to raise her black son in a world that won’t judge him by his skin or hair. More work is still to be done.

“We are the change,” said Perry.

Spirit of Moonpie and I spent the 31st through the 2nd on the Blackwater above Burdette. The water was rather... read more