Dr. Robert G. Edwards: ‘‬Patients are like family to me’

Robert G. Edwards, M.D., retired from lifelong practice as an internal medicine physician on March 30. He provided patient care for more than 53 years in Franklin as a physician with Southampton Memorial Hospital. 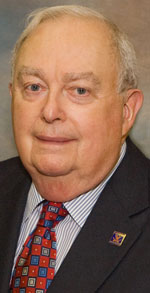 ‫“‬As a hospital we have come to depend upon his sound leadership and clinical judgement as we have responded to changing times,” said SMH President Kim Marks. “We will miss his presence in our medical practices and the camaraderie with our staff on a daily basis. We wish him a happy and healthy retirement which is well deserved.”

Edwards earned his medical degree from the University of Virginia School of Medicine, then went to Norfolk General Hospital for his internship and Internal Medicine residency.

He moved back to his hometown of Franklin in 1965 to begin treating patients.

‫“‬I was born and raised in Franklin. I was delivered by Dr. [Joel] Rawls in my parents’ home,” said Edwards. ‫“‬I‫’‬ve been able to treat a lot of patients in nearly 54 years. I think the thing that I‫’‬m most proud of is the fact that I‫’‬ve been able treat and help several generations of Franklin families.”

He has spent most of his life caring for people he calls family.

‫“‬Patients are like family to me. When I first came here as a doctor, I was treating the parents of my friends. Later on, I was treating my friends, then after that their children, then to some extent their grandchildren. I feel like I‫’‬m part of the Franklin family. The people I treat are family,” he said.

Marks said, ‫“‬Dr. Robert Edwards has been instrumental in the start up and implementation of new services to meet the communities growing needs.”

Among his many accomplishments, Edwards helped bring cardiac resuscitation to Franklin and started the Primary Intensive Care Unit at SMH.

‫“‬We started out with four beds and a few years later we were able to move into a modern eight-bed unit with modern equipment. It could not have been possible without the help of some dedicated nurses and administrators. One of these nurses later agreed to become my wife,” Edwards said. “Sandra helped train the nurses, especially in the art of reading an EKG. While she was the nursing director of the ICCU, we worked together on numerous policies and bylaws. I must admit that I believe I got credit for many of the things for which she was responsible. Later on she became the engine that made me move.”

‫“‬I am glad that I came back to my hometown. It gave me the opportunity to raise my family in the same community where I grew up and loved in my youth. Also, I‫’‬m thankful for the privilege of working with some outstanding doctors, nurses and technicians,” Edwards added.

I put away my idols: Time

By Charles Qualls Let me ask you a question. Do you have idols that you worship? You’ve been encultured, or... read more