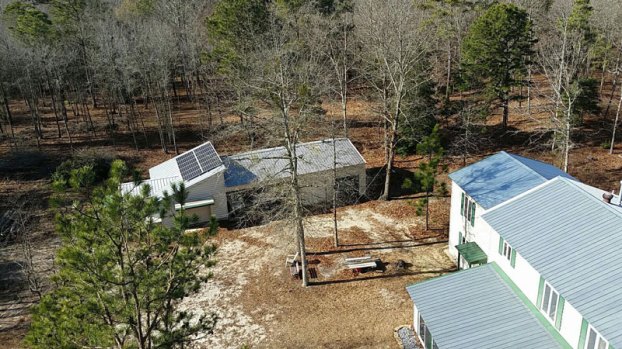 Jo Weaver and her family have been living off the grid for 23 years. Solar energy has been a major part of that lifestyle change. Submitted | Jo Weaver

Living off the grid … in the beginning

We were lucky. When we looked at bringing electricity to our land so we could build a house and move there, we found that it cost the same to connect to the power company as it did to go solar. We got to make the decision without finances being a part of it. It was liberating. Here we are, off the grid 23 years later and counting.

Our first system was designed and built by a lay person who read books, while checking out websites and companies that specialized in off-the-grid systems. Back in the mid-’90s there were many energy- saving steps that needed to be employed to make sure there was enough electricity. We lived without an air conditioner, dish washer and clothes dryer. We had a super-efficient washer and refrigerator. Our range was gas, we had an on-demand gas water heater, and we heated with a soapstone wood stove. There were also quirks to the system, like if there was not enough draw of electricity the system would go into “search” and lights, if on, would act like strobes. There was one summer it was so hot the little plastic cushions behind the pictures melted leaving dribbles of brown down the walls.

We did look one other time about connecting to the grid, and the cost was more than we wanted to pay. Three years ago, we had the entire system redone. It was time for a system that worked better, needed less maintenance, and some one else could fix. We went with professionals and the entire project took three days. We looked for people who had the most experience with residential solar. The technology was so different, the batteries were maintenance-free, and the output was much better. For the first time in 20 years we were living with air conditioning. We use it kind of sparingly, setting it at 80 and opening the house at night if we can.

We do still practice many of the energy-saving strategies we used with our first system. Anything with a continual draw is plugged into an electrical stick that has an on and off switch. I confess the recording device on the TV is likely to be on 24/7 now as I like to record a variety of shows and the system will support it.

[Editor’s note: This version corrects the dateline, which previously was listed as Suffolk.]

By Jeff Turner Spirit of Moonpie and I spent the 24th through the 26th on the Blackwater above Joyner’s Bridge.... read more