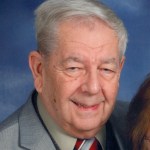 Born in Massillon, Ohio, he was a son of the late Harry Peter Siffrin and Kathleen Herman Siffrin.

John was a former Wisconsin National Guardsman and an airplane manufacturing purchasing manager.

He is predeceased by his first wife, Gloria Turgeon Siffrin, and two sisters, Jeannie Wise and Karen West.

A funeral will be held in Immaculate Heart of Mary Catholic Church and burial at Good Shepherd Catholic Cemetery in Lancaster, California.

Haley-Olsen-Murphy Funeral Home in Lancaster, California will be handling the arrangements in California.